Desert Locusts on Their Way to Rwanda – Meteorology Agency 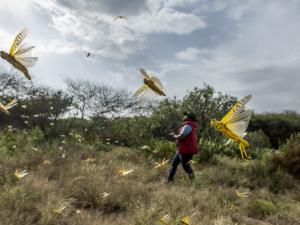 Rwanda’s Meteorology Agency has predicted that the desert locusts could land in Eastern Province within two weeks.

Rwanda has appointed a task force charged with any possible invasion of the deadly locusts that have already attacked neighbouring countries.

The agency said Rwanda remains safe, but the safety will only last for 10 days from now before the locusts land in the country.

“Considering the current status and weather forecast we’re likely to be affected mostly in @RwandaEast but for the next ten days we are still safe. Locusts spend much time in green vegetations area. We are closely monitoring the weather and we shall let you know of any dvpt,” Rwanda Meteorology Agency tweeted on Thursday.

The statement from the agency comes shortly after Rwanda Agriculture Board (RAB) and Nyagatare district authorities dismissed fears that locusts could have arrived in Rwanda after a group of insects looking like the deadly locusts were spotted in the Eastern Province district of Nyagatare.

A task force from the ministry of Agriculture and Disaster management has been established to deal any possible attack. The task force will, among other things, inform the people about measures in place and how people should behave in as far as desert locusts is concerned.

The United Nations has warned that the locust invasion could turn into a major catastrophe for the Horn of African and Eastern African region as well as the Middle East if not managed ahead of the forthcoming rains starting March through April.

In a statement released by the ministry of Agriculture today, Rwandans were requested to remain vigilant and share any information regarding the locusts.

A desert locust swarm can be 460 square miles in size and pack between 40 and 80 million locusts into less than half a square mile. Each locust can eat its weight in plants each day, so a swarm of such size would eat 423 million pounds of plants every day.