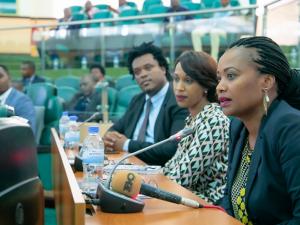 Rwandans living and working abroad have challenged the Senate to push for the enactment of laws punishing denial and minimisation of the 1994 Genocide against Tutsi, globally. They made the appeal on Monday in Kigali during a meeting with the Rwanda Senate.

The meeting intended to encourage the Rwandan community abroad to step up efforts against denial or trivialisation of the Genocide, especially outside Rwanda.

The request came after a senatorial report released on October 3, shows that there were widespread cases of Genocide denial committed abroad.

Before the discussion, the Rwandans in diaspora visited the Campaign against the Genocide Museum at the Parliamentary Buildings.

Jean Baptiste Kayigamba, who lives in the United Kingdom, said that some “scholars” on Rwanda and media in Europe still deny the 1994 Genocide against the Tutsi.

Edison Niyibizi, the Chairperson of Rwandan Diaspora in South Africa, speaks during the meeting at the Senate on Monday. Photo: Emmanuel Kwizera.

“In those countries, there is a law punishing anyone who negates or minimise the Holocaust – the genocide committed against the Jews. So, I would like to request parliament or government to conduct a campaign so that all countries have laws that punish the trivialisation of the Genocide against Tutsi,” he said.

Patrick Ndengera, President of Rwandan diaspora in Montreal, Canada, said that they were keen on working with parliamentarians in that country to enact a law penalising genocide ideology.

“We are considering a parliamentary motion that will enact a law punishing genocide ideology which will make it easy to pursue, in courts, those who commit it,” he said.

Jean Damascène Bizimana, the Executive Secretary of the National Commission for the Fight against Genocide, said that lack of laws punishing genocide crimes in some countries is a challenge for the expedition of justice delivery.

Bizimana cited five Rwandan Genocide fugitives in the UK, namely Dr Vincent Bajinya, Celestin Mutabaruka, Emmanuel Ugirashebuja, Charles Munyaneza, and Emmanuel Nteziryayo against whom Rwanda issued arrest warrants but have not yet been brought to justice.

Since 2014, the UN resolution requests countries to establish a law punishing the denial of the Genocide against Tutsi.

However, Bizimana said that only Italia, France and Belgium have enacted such laws.

These three countries, he said, add to three others – Switzerland, Luxembourg and Poland – which had similar laws before the UN resolution.

The newly released study by the Senate also recommended that the organs in charge of justice and foreign affairs and cooperation request countries and international organisations to expedite the inclusion of law punishing genocide, its denial and minimisation in their legislation, pointing out that genocide crime has no boundaries.

Senate President Augustin Iyamuremye told the members of the Rwandan community aboard that the content of the research, especially the strategies it has drawn up, could be fundamental to the activities aimed to fight denial and minimisation of the Genocide.

He said that one of the findings of the research is that Genocide denial and minimisation are a plan that was made with an aim to frustrate justice and ensure impunity for those who took part in the 1994 Genocide against Tutsi.

“This research is, therefore, one of the foundations for your activities as the Rwandan community abroad in line with the responsibility to put first the unity of Rwandans, as well as fight the plot of the 1994 Genocide against Tutsi which has now reached the denial and minimisation stage,” Iyamuremye said.