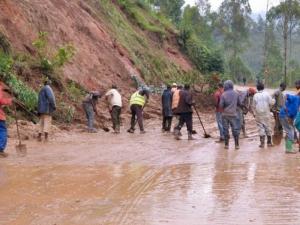 Statistics from the Ministry of Emergency Management (MINEMA) show that 70 people died countrywide between January and September 2019, due to disasters.

The figures were presented during a news conference on Tuesday.

Officials used the occasion to launch the ‘Disaster Risk Reduction Month’, a nationwide campaign that will last the entire month of October.

The campaign will run under the theme; “Build to last, my responsibility for disaster resilience”.

Figures also indicate that 177 people were injured during the same period, 4,095 houses were damaged, 6,708 hectares of crops destroyed, while 167 livestock were killed.

Fire incidents are responsible for eight deaths, while 20 people were injured in infernos over the last nine months. Forty-four houses, 75 hectares of forest cover, 11 schools and two markets were also destroyed in fire incidents.

MINEMA estimates that these damages were worth about Rwf744 million.

The financial loss is less than the worth of damages suffered in each of the last two years. In 2018, the country lost Rwf204 billion due to disasters, while the value of damages for the year 2017 was estimated at a whopping Rwf6.7 billion.

Everyone ‘should play a role’

The Minister for Emergency Management, Germaine Kamayirese, told journalists that working together was key to address these disasters.

“We want every resident of this country to be involved in this fight. If we join hands we will overcome,” she said.

“We can’t stop disasters but we can minimize damages by arming ourselves with knowledge on disaster risk reduction and preventing manmade disasters,” she added.

She said that the Government is stepping up efforts in community awareness drives.

“This month-long campaign is part of broader efforts to ensure that members of the public are actively involved with mitigating these disasters because if they don’t we won’t succeed,” she said.

Activities to be implemented during the campaign include training of different stakeholders involved with disaster risk reduction, prevention and mitigation, and commissioning community works together with the local population in different districts.

“We are now working together with all government institutions in planning for the construction of houses and transport facilities, for us to reduce on losses,” she said.

The Government has long called on people who live in disaster zones to relocate to relatively safe areas.