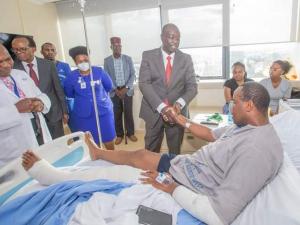 Deputy President Rigathi Gachagua on Tuesday paid a visit to the Presidential Escort officers who he said were recuperating in hospital following a road accident.

The DP did not disclose the number of the officers who were admitted to the hospital but said that the doctors assured him that the officers will be discharged in a few days.
“Took time to visit officers of the presidential Escort admitted in hospital after a road accident. I am happy they have made substantial progress and the doctors assured me of their discharge in the next few days. We celebrate our police officers for their patriotism and commitment,” DP said through a post on his Twitter account on September 20, 2022.

Sad! Fallen Tiktoker Devance Ogweno’s last social media post
The DP’s sudden change of attitude towards the police officers comes after the United Democratic Alliance (UDA) won the presidential seat in the concluded election.
During the campaigns, Mr Gachagua was hard on the police officers who he said were being misused by the Interior Cabinet Secretary Dr Fred Matiang’i.

At some point, the DP claimed that there were plans to use the police officers to disrupt the elections in areas that are strongholds of President William Ruto, hence, infusing fear in the voters’ hearts, therefore affecting the voter outcome.

Tiktoker Truthwatchdog: I’m not afraid of death, I’ve buried168 lives
The DP had said that the Kenya Kwanza administration would initiate changes to the National Police Service unit to ensure that the police are being treated well.
Some of the changes expected to be initiated include doing away with the blue uniforms that were introduced by the former regime of President Uhuru Kenyatta.

Also, President Ruto’s promises to have the Inspector General of Police as the accounting officer for the National Police Service has already been effected after the National Treasury CS Ukur Yatani gave the police autonomy in financial decisions.

The mandate was initially a responsibility that was executed by the Office of the President.
President Ruto said that the move will strengthen the independence of the National Police Service.
https://nairobinews.nation.africa/dp-gachagua-shows-love-to-hospitalised...