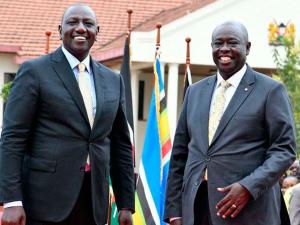 Deputy President Rigathi Gachagua is expected to be in charge as President William Ruto heads to the United Kingdom and United States on official duty.
DP Gachagua was, alongside President Ruto elected on August 9, 2022, and sworn in last week.

Gachagua has in the past served as a former District Officer and Mathira lawmaker.
He is a former close aide of former president Uhuru Kenyatta before the dup dramatically fell out.

He is reported to have played a critical role in the election of William Ruto as Head of State.
He’s been a butt of jokes on social media in recent media owing to his narration skills, speech gaffes, and dress code and has since been nick named Riggy G.

President Ruto is among the 500 presidents and dignitaries that will be present at Queen Elizabeth II burial scheduled to take place on Monday.
The Head of State is expected to be hosted for a dinner by King Charles III upon arrival in the United Kingdom.

Queen Elizabeth II, who reigned for 70 years died on September 8th in Buckingham palace.
The late Queen was, Britain’s longest-serving monarch and had been dogged by health problems since last October that had left her struggling to walk and stand.

After the funeral, President Ruto will leave for the United States of America where he will attend the 77th United Nations General Assembly (UNGA) in New York.
President Ruto is expected to meet US President Joe Biden and officials from the American chamber of commerce.

The UNGA meeting will be first to be held in person since the onset of the Covid-19 pandemic that discouraged physical interactions having held the 2020 and 2021 meetings were held virtually.
https://nairobinews.nation.africa/dp-rigathi-gachagua-in-charge-as-ruto-...