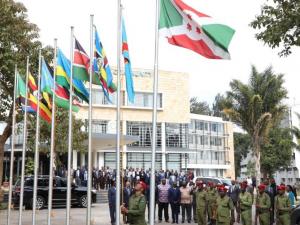 The Democratic Republic of Congo (DRC) is now an official member of the East African Community (EAC) after depositing instruments of ratification on the accession of the EAC Treaty with the bloc’s secretariat.

At a function held at the EAC headquarters in Arusha, Tanzania, on Monday, the DR Congo delegation led by its Vice Prime Minister and Minister for Foreign Affairs, Christophe Lutundula Apala Pen’ Apala, completed its final step in joining the regional bloc.

“This is a formalisation of a situation that has always been in existence. Somehow we can say the DRC joined their people,” said Mr Apala Pen’ Apala.
“In the name of the DRC, all the institutions and the people of Congo, we totally trust the EAC.”

He reaffirmed his country’s commitment to being part of the Community and joining the various areas of cooperation in all the sectors, programmes and activities that promote the four pillars of regional integration -- the Customs Union, Common Market Protocol, Monetary Union and the Political Federation.

Two-month window for Kinshasa to align budget with EAC
East African Community Secretary-General Paul Mathuki displays the Democratic Republic of Congo's instruments of ratification on the accession of the EAC Treaty at the EAC headquarters in Arusha on July 11, 2022. Looking on is DRC deputy PM and Foreign Affairs minister Christophe Lutundula Apala Pen’ Apala. PHOTO | EAC

“Today marks the completion by the DRC of the processes and procedures towards becoming a full member of the EAC,” said Dr Peter Mathuki, EAC secretary-general.
“Article 11 of the Treaty of Accession by the DRC to the EAC Treaty provides that the Accession Treaty shall enter into force on the date the DRC deposits the instrument of ratification with the Secretary-General of the EAC. So, I am very happy to declare that, today, 11th July 2022, the DRC has become the 7th Partner State of the EAC.”
https://www.theeastafrican.co.ke/tea/news/east-africa/dr-congo-becomes-f...