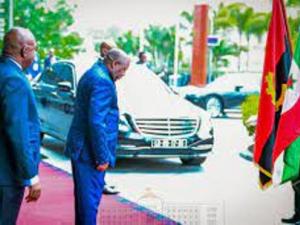 Burundian President Evariste Ndayishimiye has arrived in Luanda on Wednesday, November 23 for a summit on the security crisis in eastern DR Congo.

President Ndayishimiye departed for Luanda on Wednesday morning to attend the second summit in which “several heads of state” in the region will take part, his office said in a statement.

By press time, the office of President Kagame had not yet communicated about the Luanda summit.

The first Luanda summit took place in July, in which a roadmap for the pacification of eastern DR Congo was designed and agreed upon by Presidents Kagame and Tshisekedi.

The regional leaders have resolved to harmonise the EAC-led Nairoi process and the Luanda mechanism.

Through the Luanda roadmap, President Lourenço is the mediator between Rwanda and DR Congo, whose relations have soured, following claims by Kinshasa that Kigali supports the M23 rebel group in eastern DR Congo.

Rwanda denies the allegations, instead accusing the Congolese army FARDC of colliding with the FDLR – whose members are accused of genocide crimes in Rwanda –in the ongoing war with M23 rebels.

Lourenço, who is the chair of the International Conference on the Great Lakes Region (ICGLR), met President Kagame in Kigali on November 11. He later met Tshisekedi in Kinshasa.

They discussed the security crisis in eastern DR Congo, which is the home for over 120 armed groups, who are accused of various abuses.

Attempts to resume peace talks on Monday in Nairobi, Kenya between the Congolese government and the armed groups failed.

The EAC resolved to deploy troops to the restive region. Kenya has already deployed 900 troops and Burundian and Ugandan contingents are set to arrive soon.