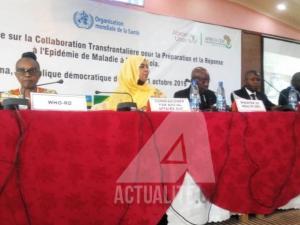 The Democratic Republic of the Congo (DRC) and its nine neighboring countries on Monday, during a meeting of ministers, senior health and immigration officials and partners in Goma, endorsed a joint framework to strengthen cross-border collaboration on preparedness and response to Ebola virus and other disease outbreaks.

Representatives of the 10 countries – Angola, Burundi, Central African Republic, Republic of the Congo, Democratic Republic of the Congo, Rwanda, South Sudan, Uganda, United Republic of Tanzania and Zambia – noted with concern the Ebola outbreak in north-eastern DRC, which has continued for more than one year, and the increasing potential to spread into the neighboring countries. They recognized the shared threat that the outbreak poses to health and economic security in the sub-region and other parts of Africa and the need to develop an action plan to mitigate the effects of these threats.

“Resources are always limited, and there are always gaps in emergency contingency plans. Setting up a mechanism for cross-border collaboration and the sharing of assets will contribute to the mitigation of suffering and minimize the social and economic impact of disease outbreaks,” said H.E. Amira Elfadil Mohammed, African Union Commissioner for Social Affairs.

“In recent times, Ebola has been in the spotlight. Other diseases also pose a significant threat. These events highlight the immense importance of cross-border collaboration to improve the sharing and exchange of information to quickly contain outbreaks, harmonize resources, increase coordination and stop diseases from crossing the borders,” said Dr Moeti.

The movement of people, goods and services across borders can heighten the risk of transmission of infectious pathogens that cause diseases, such as Ebola, cholera, measles and yellow fever.

“As the African Union advances towards implementation of Agenda 2063, which aspires for the political and economic integration of Africa, including the free movement of people across the continent, there will be a change. We need to be prepared for the risks that this change poses to the continent. A multi-country effort on Ebola outbreak response and preparedness will be a good example of the use of our collective capabilities in this regard,” said H.E. Mohammed.

The ministerial meeting was co-organized by the Government of the DRC, WHO and the African Union Commission through its Africa Centres for Disease Control and Prevention (Africa CDC). Participants reviewed the situation of the outbreak in the DRC and level of preparedness by the 10 neighboring countries, and discussed a road map for effective and sustained collaboration.

“It is a good thing for the DRC to formalize a framework for collaboration and adopt a road map with its neighboring countries on Ebola preparedness and response. In this way, we will be able to pull our resources together to strengthen health security and safety,” said Dr Albert Biyombo, Vice Minister of Health in the DRC.

Representatives of the Member States agreed to strengthen mechanisms for the exchange of timely and accurate information on Ebola preparedness and response and other health security risks and noted that withholding or falsifying information and data on Ebola violates the International Health Regulations and threatens peace, security and prosperity of the affected Member States and the entire continent.

“We acknowledge the solidarity that other African countries are showing today by organizing this very important meeting. The meeting will allow us to agree on communication mechanisms across borders on EVD and a common action plan on preparedness and response in case of emergencies,” said H.E. Carly Nzanzu Kasivita, Governor of North Kivu Province, where the meeting took place.

“Information sharing is improving, but we need to bring it to an acceptable level. We need countries to openly share information necessary to save lives. Our mission is to establish cross-border collaboration that will cover all outbreaks and all public health emergencies,” said Dr Moeti.

The ministers and senior health and immigration officials also endorsed the establishment of a coordination task force on EVD and other disease outbreaks, which will be hosted in the African Union Commission headquarters in Addis Ababa. The task force is expected to facilitate sustained political commitment to preparedness and response to disease outbreaks. Technical support will be facilitated through the WHO sub-regional Ebola partnership coordination platforms in collaboration with the Africa CDC and other partners

Although this framework does not contain any funding commitment for emergency response and preparedness, WHO and the African Union/Africa CDC encourage countries to invest more in this area. Countries that have ramped up their preparedness are better able to handle emergencies, minimizing the social and economic costs of outbreaks and other public health events.