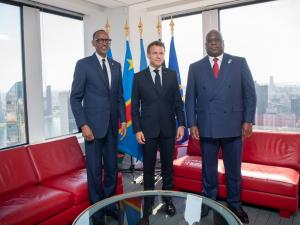 A trilateral meeting of the Presidents of the Democratic Republic of Congo, Rwanda and France on the sidelines of the United Nations General Assembly on Wednesday agreed on a roadmap towards restoring peace in the Eastern part of DRC.

On the initiative of the French President Emmanuel Macron, President Paul Kagame met his Congolese counterpart Félix Antoine Tshisekedi and the three Heads of State expressed their concern at the resurgence of violence in the east of the DRC and urgent steps to provide a regional and coordinated response to the threat posed by armed terrorist groups in the region.

According to a statement released by the French Presidency, in order to create the conditions for a frank and constructive dialogue, necessary for the revival of cooperation between the countries of the region and in accordance with the Luanda process, they agreed to act together to obtain the withdrawal of the M23 as soon as possible, out of all the localities it is occupying.

They also agreed on the return of people displaced by war from these localities to their homes, with the support of the United Nations and its partners from the African Union, the East African Community and the International Conference on the Great Lakes Region (ICGLR).

“They also agreed to sustainably intensify their cooperation to fight against impunity and put an end to the activities of armed groups in the Great Lakes region, including the Democratic Forces for the Liberation of Rwanda (FDLR). These efforts will be part of existing regional peace initiatives, including the Nairobi process,” the statement says.

Earlier in the day, President Kagame, while addressing the 77th UNGA reiterated the need for a political solution to the security challenges in the Great Lakes Region, particularly the conflict in the eastern DRC, pointing out that apportioning blame cannot resolve the situation.

President Kagame reiterated that the renewed conflict in Eastern DRC equally threatens Rwanda as it does the DRC, following recent attacks targeting the Rwandan territory, by terror group FDLR.

“In the eastern Democratic Republic of Congo, recent setbacks have served to highlight that the security situation is fundamentally no different than it was 20 years ago, when the largest and most expensive United Nations peacekeeping mission was first deployed. This has exposed neighbouring states, notably Rwanda, to cross-border attacks that are entirely preventable,” President Kagame said.

“There is an urgent need to find the political will to finally address the root causes of instability in eastern DRC. The blame game does not solve the problems. These challenges are not insurmountable, and solutions can be found. This would ultimately be much less costly in terms of both money and human lives,” he added in a short remark on DRC.

President Tshisekedi on the other addressed UNGA on Tuesday, where he mentioned Rwanda several times in his speech, without providing the political and historical context of the conflict which threatens regional stability.
https://www.ktpress.rw/2022/09/drc-conflict-macron-kagame-tshisekedi-agr...