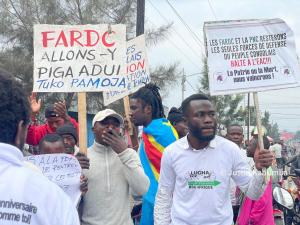 In the Democratic Republic of Congo, security forces dispersed hundreds of people demonstrating against East African Community (EAC) forces.
These residents demanded that within three days EAC troops go to war to cooperate with the Congolese government against the M23 group which opposes the current government in that country.
After these days, human rights organizations and non-governmental organizations in the province of North Kivu organized demonstrations to demand the return of the troops to their countries, claiming that they had done nothing congo.

The deployment of EAC troops to the DRC follows a decision endorsed and adopted by regional leaders during the Third EAC Heads of State Conclave on Peace and Security in Eastern DRC which s is held in Nairobi in June 2022. The Conclave agreed to have an East African Community Regional Force (EACRF) to quell an outbreak of violence in eastern Democratic Republic of Congo.