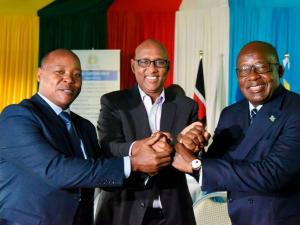 The imminent deployment of the East African regional force to the eastern parts of the Democratic Republic of Congo will be preceded by a massive civilian awareness campaign. Officials say they first want to correct errors committed by other international missions by educating civilians on the tasks of the force, which will include engagements with locals to abandon war.
It is a new tactic endorsed last week by Kinshasa to help begin a peacebuilding programme on a clean slate.

But while it’s only a matter of time for troops to hit the ground, military chiefs from member states agreed in their Concept of Operations to give prominence to civilian engagements. They agreed that past deployments by the UN and regional bloc SADC faced routine public suspicions. For the UN, the forces have in the past been accused of atrocities including rape. Since July, protesters have targetted UN peacekeepers’ camps in eastern DRC, accusing them of failing to beat down rebels.

One killed during anti-UN protest in east DR Congo

The standby force by the EAC will have an initial timeframe of six months, renewable, and will, besides combat, work on civilian programmes such as setting up social amenities and holding peace meetings with villagers in a new strategy meant to endear locals to the authorities.
“The objective is to stabilise the region, to put an end to terrorist and criminal activities and to promote cooperation, a true partnership, beneficial to all,” said Lutundula.

Vast distances
The deployment of this force will take place in North Kivu, South Kivu and Ituri, three huge provinces whose combined area is seven times the size of Rwanda but which have not known peace for three decades. These provinces are also where a hundred or so armed groups of various kinds are hiding.

The deployment of the regional force will take place in a particularly tense context: The M23 rebels have resumed attacks on civilian and military bases, including the town of Bunagana, on the border with Uganda.

Additionally, Uganda’s ADF terrorists have been able to resist both the Congolese and Ugandan armies despite a joint operation launched in November. Last month, the ADF managed to carry out an escape operation of more than 800 prisoners in North Kivu. Authorities said some of the prisoners have now been recruited to fight for ADF.

Conservative estimates show that at least six million people have died from conflict in eastern DRC since 1994. This is in spite of various missions of peacekeeping, including the UN stabilisation mission (Monusco). Recent protests against Monusco were an expression of the inefficiencies of the missions.

Besides the forthcoming East African regional force, the area is already patrolled by the FARDC (the Congolese army), the UPDF (the Ugandan army) since last year, the Burundian army since last month and Monusco since 1999.

Expectations are high for the contingents. Reacting to the disillusionment of Monusco, with its 16,000 soldiers, in June, Bintou Keita, the head of Monusco explained the need for “a regional solution" to overcome the insecurity.

The contrast between the enormous expectations of the Congolese authorities with regard to the regional force, and the reticence of the same force by a part of the Congolese is striking, however. Roger Manzakele, spokesperson for the North Kivu civil society association said most Congolese “fear unnecessary and disorderly over-militarisation.”

“On top of that, there have been many other forces that have been here for a long time and yet the situation has never changed. We think that with this, the DRC will be too dependent on others for security,” he said.

The Congolese are trying to maintain a good hope that peace will return thanks to the actions of neighbours.

Nobel Prize winner Denis Mukwege and opposition leader Martin Fayulu have been among the doubting Thomases. Mr Fayulu told The EastAfrican last month that “DR Congo must not leave the issue of security in the hands of foreign armies.”

The deployment may bank heavily on a supportive vote by the public. But this early excitement may be pricked if rebels put up a fight.
https://www.theeastafrican.co.ke/tea/news/east-africa/east-african-stand...