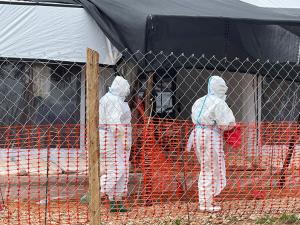 President Yoweri Museveni has placed Mubende and Kasanda districts under total lockdown for at least 21 days in a bid to control the spread of the Ebola Virus Disease.

In his address to the nation on Saturday evening, Museveni banned unauthorised movement to and fro the two districts, the epicentres of the current outbreak. Government confirmed the outbreak of the rare Ebola Sudan variant on September 20, 2022, in Mubende district. The virus has since spread to Kasanda and other districts.

The president also instituted a 7 pm-6 am curfew within the two districts as well as suspending public transport, saying public transport has led to the further spread of the virus to other parts of the country. Kampala registered two cases this week - all contacts to patients from Mubende. Twagirayezu Ndahiro died at Kiruddu hospital in Kawempe in Kampala days after he was listed as a contact. Another victim, a lady also from Mubende died of Ebola in Kampala.

In his address, Museveni said that there are two other people now battling the virus while over 13 people expected to have travelled in a taxi with infected people to Kibuku in eastern Uganda.
"I am now here pleading with people, please don't die. What sort of people are these? So now movements into and out of Mubende are prohibited. Don't try to exit or enter Mubende district. If you're in Mubende stay there, don't move out of there and if you want to go to Mubende don't move into," Museveni said.

Mubende and Kasanda districts are transit districts for people exiting Kampala to Kyegegwa, Kyenjojo, Kabarole and Kasese districts. But, the president says, people from those other districts will be allowed to transit with the clearance of security and shall not stop to pick or offload passengers or even fuel vehicles in Mubende.

All cargo shall be delivered to districts and leave by 5 pm and anyone who sleeps in Mubende or Kasanda shall be required to stay there for 21 days. The president also suspended all seasonal markets but said that mines shall remain open only to people in those districts. Owners of mines are required to install hand washing facilities and temperature guns for all people accessing the mines to be checked.

The president further said that schools shall remain open and students required to move while in their school uniforms. Schools have been instructed to install hand washing facilities and temperature guns.

The government directed that any school absence must be reported immediately to the response teams and investigated while all children, teachers and non-teaching staff who have had contact with a person who has signs and symptoms of Ebola should not go to school.

The restrictions shall also affect seasonal markets, worship places, social places like bars and gyms while all burials shall be conducted by the safe burial teams, regardless of whether the deceased died of Ebola or not.

According to the ministry of Health data, 19 people have so far died from Ebola while 54 have been infected and 20 people are said to have recovered including five medics from the first hospital where a case was treated in Mubende. They were discharged on Tuesday.

Ebola can be transmitted from one person to other through exposure to liquids from the affected person. Some of the symptoms of the virus include headache, fever, diarrhoea, and unexpected bleeding from body openings like the nose, anus and mouth.
https://observer.ug/news/headlines/75528-ebola-mubende-kasanda-districts...