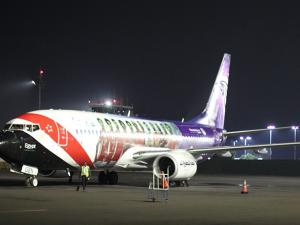 Egypt’s national carrier EgyptAir on Saturday launched two weekly flights connecting Kigali and Cairo, a development officials say will boost trade ties between Rwanda and Egypt and ease the cost and movement of people and goods.

The first flight of EgyptAir, operated by the airline’s Boeing 737-800’s touched down at Kigali International Airport at 3:30am on Sunday and was greeted by a ‘water salute’ from Rwanda Civil Aviation Authority, making the EgyptAir the 8th airline to have direct flights to Kigali.

The Minister of State in charge of Transport, Jean de Dieu Uwihanganye, who officiated at the launch of the EgyptAir flights to Kigali, said that the opening of the Cairo-Kigali route by the EgyptAir, confirms Rwanda’s ambition to become an aviation hub.

“The arrival of EgyptAir affirms Rwanda’s ambition to make aviation a pillar in the economic transformation of the country. We are continuing to achieve that target step by step. As part of our aviation policy, we have liberalised our airspace, which is why we are receiving our brothers from Egypt and other African countries with open arms,” he said.

“EgyptAir is an African airline. With Rwanda being one of the pioneers of the Single Africa Air Transport Market, which Egypt is also a member of, having EgyptAir coming here means a lot to Rwanda and it also means a lot for the bilateral relations between Egypt and Rwanda,” Uwihanganye said, adding that it also created close links between civil aviation authorities of both countries.

The state minister said that Egyptair opening the route also comes with new economic opportunities and jobs for both countries.

“There are a lot of economic opportunities because relations between Rwanda and Egypt have in recent years warmed up and we are seeing improvement in terms of trade –an increase in the amount of goods we export to Egypt and what we import from Egypt,” he said.

In 2017, President Paul Kagame and President Abdel Fattah al-Sisi of Egypt agreed to bolster ties between their countries during the Egyptian leader’s working visit to Kigali. According to available statistics, Rwanda’s exports to Egypt are worth over $30million, while Egypt’s exports to Rwanda are well above $65million.