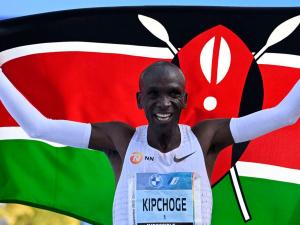 Two-time Olympic marathon champion and world record holder Eliud Kipchoge has made it to the list of five finalists for 2022 Men’s World Athlete of the Year Award.

The World Athletics has released the names of the five finalists from an initial list of 10.
Kipchoge’s nomination follows his world record-breaking performance in Berlin Marathon last September when he lowered his world mark to 2:01:09. Earlier in the year, Kipchoge also won the Tokyo Marathon.

Why Rainbow Picnics are popular among Kenyan Tiktokers

World Athletic said the five athletes, who are representing five countries from three area associations, have achieved sensational performances across a range of athletics disciplines in 2022, at the World Athletics Championships Oregon22, World Athletics Indoor Championships Belgrade 22, one-day meeting circuits and other events around the world.

Kipchoge, 37, won the prestigious award 2018 and 2019 awards and also made the final list for the 2020 and 2021 awards.
He will face stiff competition from world pole vault champion (indoors and outdoors) Mondo Duplantis from Sweden, world 3000m steeplechase champion Soufiane El Bakkali of Morocco, world 5000m champion, world 1500m silver medalist (indoors and outdoors) Jakob Ingebrigtsen from Norway and world 200m champion Noah Lyle from the US.

Exclusive – Zzero Sufuri got grade D but shines in the school of life
The voting process for the finalists closed on October 31, and the World Athletes of the Year will be announced on World Athletics’ social media platforms in early December, as part of the World Athletics Awards 2022.

No Kenyan female athlete made it to the five finalists for Women’s World Athlete of the Year, but World 1500m champion Faith Kipyegon was among the 10 nominees who were listed earlier.
https://nairobinews.nation.africa/eliud-kipchoge-among-five-finalists-fo...