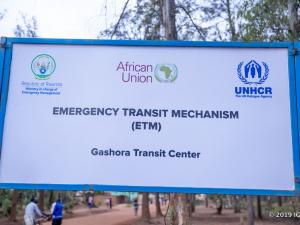 European Union has announced a €10.3 million (Rwf10.4bn) support to the Emergency Transit Mechanism (ETM) in Rwanda that accommodates refugees evacuated from Libya.

The centre, which is located in Gashora, in Bugesera District, currently accommodates close to 200 refugees from different countries, mainly Eritrea, Somalia and Sudan.

The announcement was made following a visit early this week to the centre by Neven Mimica, the European Commissioner for International Cooperation and Development.

The facility provides them with accommodation, protection and other basic services.

Mimica said that the support is in a bid to encourage Rwanda’s effort to help refugees and asylum seekers form Libya.

“This project will support efforts of the Government of Rwanda to receive and provide protection to about 1,500 refugees and asylum-seekers who are currently being held in detention centers in Libya,” he said.

The funding is provided through the Emergency Trust Fund for Africa, according to a statement from the EU.

This initiative builds on the example of the ETM Niger, through which more than 2,900 refugees and asylum seekers have been evacuated out of Libya since 2017.

The months of September and October saw the arrival of nearly 200 Libyan refugees and asylum seekers to Rwanda in two groups and more are expected in the coming days.

This followed a joint agreement signed between Rwanda, UNHCR and African Union on September 10 for the former to come to the rescue of the suffering Africans, some of whom have ended up being sold as slaves.

Mimica sees Rwanda’s willingness to help Libyan refugees as a proof of the possibility of solidarity in African.

“It is such a remarkable and powerful proof of that African solidarity should be further encouraged, replicated and supported,” he said.

“The ETM in Rwanda is an important sign of African solidarity and of partnership with the European Union. It broadens the support to the most vulnerable people held in Libyan detention centers that need to be closed urgently,” she declared.

ETM is UNHCR's mechanism that provide a life-saving avenue out of Libya for people in need of international protection, with a view to their further resettlement.

Since 2017, UNHCR has evacuated more than 4,250 refugees and asylum-seekers out of Libya to other countries.

Many African nationals have themselves in Libya where smugglers have been for years using the deadly stretch of the Mediterranean Sea to sneak them into European countries.