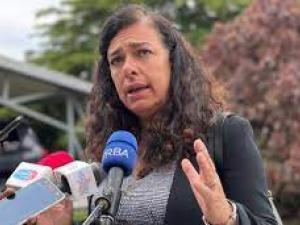 The long-awaited construction of the Kigali Wholesale Market for fresh produce could start next year, after the European Union reached a deal with the government to fund it.

The project, to be constructed under two phases, will cost an estimated Rwf29.5 billion, according to estimates from the National Agriculture Exports Development Board (NAEB).
With the capacity to handle 180,000 tonnes of fruits and vegetables every year, the market was expected to serve some 100 wholesalers.

First mooted in 2010, the first phase of the market — which is expected to be set up at the Kigali Special Economic Zone in Gasabo District — was to be complete and operational by 2018.
However, the project has faced a series of postponements owing to a combination of financial constraints and delays in fine-tuning the project designs.

Belen Calvo Uyarra, the European Union (EU) Ambassador to Rwanda said that the joint Team Europe was working together with the EU Member States for the construction of the Kigali Wholesale Market, and “we hope that in the next year we will be able to move forward”.
She said this on Wednesday after paying a courtesy call on the Speaker of the Chamber of Deputies, Donatille Mukabalisa.

On October 6, Uyarra met Rwanda’s Minister of Finance and Economic Planning, Uzziel Ndagijimana, and the two officials signed a financing agreement on Transformational climate-smart and inclusive agriculture in Rwanda for an amount of €69 million (about Rwf72.5 billion).

The programme also encompasses a Team Europe Initiative on ‘Sustainable and inclusive agricultural transformation’, built around the construction and development of the Kigali Wholesale market and related markets in secondary cities, as central components of highly productive and inclusive value chains.
“We are very pleased to work together with the European Union Member States as Team Europe in supporting the Kigali Wholesale Market. This is a flagship of activities that we will be engaging in the New Year [2023],” Uyarra said on Wednesday.

The market is expected to reduce post-harvest losses of fresh produces and boot the country’s export earnings from horticulture.
Post-harvest losses in horticulture such as fruits and vegetables were estimated at about 40 per cent, according to 2017 joint assessment by the University of Rwanda (UR), Rwanda Agriculture Board (RAB) and NAEB.

The market was expected to improve logistics planning, quality control and storage of fruits and vegetables, through providing new services like cleaning, grading, possibly drying, and cold storage that increases product life and reduce the loss of unsold products.
NAEB says it will facilitate private sector investments in value addition in the agriculture sector.

In addition to improving linkages and logistics of produce coming from rural areas, aggregation points and markets, officials said that the market will provide a modern and clean environment where food service business, food manufacturers, restaurants, hotels and regional exporters can find high-quality fresh produce.
https://www.newtimes.co.rw/article/3778/news/economy/eu-to-fund-construc...