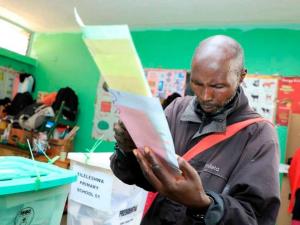 Nine ambassadors and high commissioners from European countries and Canada have jointly lauded Kenya's Independent Electoral and Boundaries Commission (IEBC) for the way it conducted the August 9 General Election.

In a statement, the ambassadors said the open election has set a standard for the African continent.

“Kenya has set an example to the region and continent as a whole. We call upon all actors to uphold the spirit of peace in the coming weeks,” the statement read.

They encouraged political parties and leaders to follow existing mechanisms for dispute resolution as guided by the Constitution.

In last week’s elections, the IEBC for the first time used Kiems kit as a primary method of identifying voters. Manual registers were also available at all the polling stations as a backup in case the digital register failed to identify a voter’s details.

The IEBC also provided the presidential election results from all constituencies on its website, where anybody could visit and tally them.

US Secretary of State Antony Blinken, through his spokesperson Ned Prince, also urged political parties to resolve any dispute peacefully and avoid violence

The Azimio la Umoja One Kenya Coalition Party candidate Raila Odinga was second with 6.9 million votes or 48.85 per cent of the total votes.

Mr Odinga argues that the results were not approved by all the seven electoral commissioners, making them null and void