Explainer: What you need to know about Kenya's election battle in Supreme Court 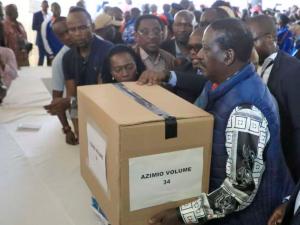 Azimio La Umoja candidate Raila Odinga and his running mate, Martha Karua, filed a petition challenging the outcome of the presidential election at the Supreme Court of Kenya on Monday, claiming the election was manipulated to favour President-elect William Ruto.

They claim, among other things, that Dr Ruto did not garner 50 percent plus one vote required for a candidate to be declared the winner and that the electoral commission chairman Wafula Chebukati announced the outcome without tallying and verifying results from 27 constituencies, which would have affected the final tally.

The duo further says the Independent Electoral and Boundaries Commission (IEBC) cannot account for 250,000 votes that were cast, excluding votes cast by voters who voted manually. The Supreme Court has admitted eight other presidential election petitions, besides Mr Odinga’s and Ms Karua's with six of them challenging Dr Ruto’s win.

What are Mr Odinga’s and Ms Karua’s prayers?
Mr Odinga and Ms Karua's want, among others, the IEBC ordered to tally and verify the vote and declare them President-elect and Deputy President-elect. They also want a forensic audit of all equipment, system and technology used by the IEBC in the presidential election and Mr Chebukati declared unfit to hold public office.

When will the court hear the presidential election petition?
Article 140 (2) of the Constitution provides that a petition should be filed within seven days from the date the electoral body declares the results.

The petitioners have one day to serve the respondents with the court documents. The respondents, including the IEBC, the commissioners and Dr Ruto and Deputy President-elect Rigathi Gachagua, have until Saturday, August 27 to file their responses.

The petitioners will then have one day within which to file a rejoinder or interlocutory applications and responses to the application should also be filed within 24 hours.

Any parties seeking to join the case as friends of the court will have one day to file and serve their applications.

The court will hold a pre-trial conference on the eighth day from the date of filing of the petition, which falls on Tuesday, August 30.

During the pre-trial conference, parties agree on issues to be determined by the court. The court will also give direction on the time allocation for each party.

Among the issues parties will address include the jurisdiction of the court; whether there were electoral malpractices and or irregularities; various declarations or appropriate orders to be issued and who should bear the costs.

Who else will assist the court in the process?
During the hearing of the presidential election petition filed by the National Super Alliance in 2017, Chief Justice David Maraga mobilised a team of 18 legal researchers, 15 secretaries and three information technology experts to assist the court.

In normal circumstances, every Supreme Court judge is assigned two legal researchers but the top court might increase the number due to the strict timelines.

Also brought in to assist the court during the 2017 election petition was an IT expert and a university don to decipher the complex issues on the transmission of results, servers and public portal, which were at the core of the dispute.

When will the court give its verdict?
The hearing of the petition commences immediately after the pre-trial conference and the case should be determined within 14 days after the filing of the case. The last day the verdict should be delivered is September 5.

If the court is convinced that there are sufficient grounds to support claims of irregularities, the judges will call for a fresh election within 60 days. The seven judges can also dismiss the petitions and uphold Dr Ruto’s win. Their decision can be unanimous or by majority vote.

In the 2017 presidential election petition, the court in a majority of four judges against two ruled that the IEBC did not conduct the elections as required by the applicable law and the constitution, rendering it null and void.

They ordered a fresh election, which was held on October 31, 2017, but Mr Odinga boycotted after his demands on the electoral process es were not met.

Also read: Explainer: What next after Ruto-Raila stalemate

Can the court direct Chebukati to announce Mr Odinga as the President-elect?
Section 80(4)(a) of the Elections Act, which was revised in 2016 allows an election court, to direct IEBC to issue a certificate to the losing candidate after a recount of the ballots cast finds that the petitioner actually won.

This will make voters avoid a repeat poll. Speaking in a TV interview, Law Society of Kenya (LSK) president Eric Theuri said “it will be difficult for the court to grant him [Mr Odinga] the request if the court found that there were irregularities”.