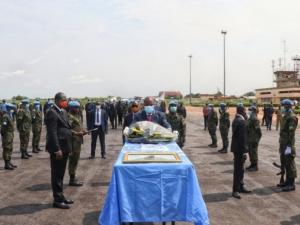 This was announced by Rwanda Defence Force on Thursday after the casket bearing the fallen peacekeeper’s body arrived in the country from Bangui, the capital of the Central African Republic.

“The casket bearing the remains of Rwandan peacekeeper, Sergeant Major Nsabiyaremye Edouard, arrived in Rwanda from the Central African Republic on 21 July 2020. He will be laid to rest at Kanombe Military Cemetery on Friday, 24 July 2020.”

The Rwanda Defence Force (RDF) soldier was killed in an attack on July 13, in Central African Republic.

According to a statement issued Tuesday, July 14, the attack was allegedly carried out by the Return, Reclamation and Rehabilitation (3R) armed elements who targeted a MINUSCA convoy in Gedze, Nana-Mambere prefecture in the northwest of the country.

Before his body was airlifted to Rwanda, the President of the Central African Republic, Faustin-Archange Touadera accompanied by other MINUSCA officials on Tuesday, July 21, paid his last respects to the fallen RDF peacekeeper.

In the wake of the sad news, the RDF, according to a statement released on the same day, sent its heartfelt condolences to the family and friends of the fallen soldier and reiterated its commitment to protect the civilians in CAR, despite the attack that cost the life of its peacekeeper.

Rwanda, one of the world’s largest contributors of peacekeepers, first deployed peacekeepers in CAR in 2014. Currently, RDF maintains one Infantry Battalion and a Level Two Hospital under MINUSCA.