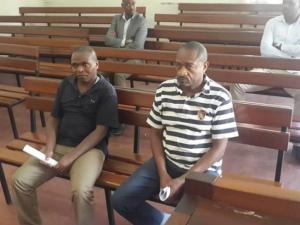 The two top commanders of the Democratic Forces for the Liberation of Rwanda (FDLR) militia—the spokesperson Ignace Nkaka, best known as La Forge Fils Bazeye, and Lt Col Jean-Pierre Nsekanabo, the head of the intelligence of the outfit—, arrested last year by Congolese authorities, on Monday appeared before a judge at Gasabo Primary Court in Kigali.

This follows their extradition to Rwanda earlier this year by the Democratic Republic of Congo.

They both appeared calm and were wearing T-shirts. They also had their two lawyers present.

Appearing before court on Monday, the duo, through their lawyers contested a request by prosecution who prayed that court remands them for a month.

In seeking remand, prosecution said that there is still more they need to do to conclusively investigate the case before the two are brought back to court for the substantive trial.

Prosecution cited the gravity of the crimes the two are accused of committing, including belonging to a terror group that has killed people and the fact that the two do not have known address in Rwanda to be able to get bail.

The FDLR comprises remnants of masterminds of the 1994 Genocide against Tutsi in Rwanda. They fled the country in 1994 after masterminding the killing of more than one million people.

They were arrested at the Bunagana border, which links Uganda to DRC, and according to reports, they were on their way from Uganda.

After hearing from both prosecution and defence, the judge adjourned the case to Tuesday afternoon, during which a pronouncement on the remand or bail of the two suspects will be made.

Nkaka, it is said, replaced another FDLR mouth-piece Michel Habimana, alias Edmond Ngarambe, who was captured in a joint military operation by Congolese and Rwandan troops in 2009.

The native of the former Préfecture Gisenyi (current Rubavu District), Nkaka was a student at the then Nyakinama University in the present-day Musanze District at the peak of the Genocide against the Tutsi in 1994.

Between July 1994 and November 1996, he is believed to have lived with his wife in Kibumba Refugee Camp, in North Kivu in DRC.

A year later, he returned to Rwanda and then left again, in 1998, to join the former the militia outfit, then known as Army for the Liberation of Rwanda (ALIR), which later metamorphosed into FDLR.

Nkaka’s elder brother, Lt. Col. Léonard Nkundiye, alias Kirenge—formerly in the notorious presidential guards before the Genocide—was deputy chief of staff of ALIR and coordinator of the activities of its political wing, the Party for the Liberation of Rwanda (PALIR), until his death in battle with other insurgents in 1998.

In 2000, ALIR merged with other groups to form FDLR.

For the past 24 years, the militia outfit has been entrenched in the DRC’s vast eastern region where they have continued to cause a humanitarian catastrophe—killing, raping and plundering—as well as launching attacks into Rwanda.

by The New Times