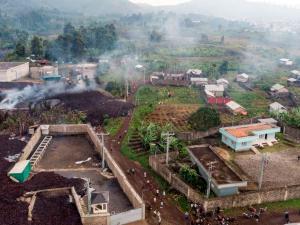 Debris engulfs buildings in Bushara village, Nyiragongo, near Goma, on May 23, 2021 after a volcanic eruption of Mount Nyiragongo in eastern Democratic Republic of Congo. PHOTO | AFP

Quakes in the area surrounding the Democratic Republic of Congo's (DRC) Mt Nyiragongo volcano and in some parts of Rwanda have raised fears that the volcano could erupt again.

On Tuesday, Rwanda Seismic Monitor registered tremors, including a 5.3-magnitude quake, in the border areas between Rwanda and the eastern DRC, near Mount Nyiragongo.

According to government officials, around 8,000 people were displaced due to lava flow and fled to Rwanda from the Democratic Republic of Congo(DRC), while many properties have been damaged on both sides of the two countries.

As of Tuesday, the officials' figures from DRC indicated that 32 people had died due to the eruption of the Nyiragongo volcano, while no life loss had been recorded on the Rwandan side.

Olive Nyiramahirwe, a mother of two, was busy preparing the supper for her family, when the Nyiragongo volcano eruption caught her out of blue on May 22.

After dropping behind everything, she quickly grabbed her two children and ran to safety in Rwanda, a journey that took them around one hour and thirty minutes from Kanyanja to Rwanda.

“[The] volcano started erupting around 7pm and we all panicked and ran for our safety. We came with nothing and we arrived here around 8.30 in the evening,” Nyiramahirwe told Rwanda Today.

According to the Rwanda Mines, Petroleum and Gas Board (RMB), the highest earth tremor on the Rwandan side was recorded on May 25, around midday at the range of 5.3 magnitude.

“Though the recent seismic activity is in the range between ML2.6 and 4.0 which do normally cause significant damage, earthquakes of elevated magnitude may occur. Most of the earthquake epicentres recorded are located in Cyanzarwe and Rubavu sectors,” said the RMB risk assessment report.

Witnesses say Nyiragongo started erupting at around 7pm on May 22.

This caused panic and people living in areas around Goma began fleeing towards Rwanda mainly in the Bugeshi, Cyanzarwe and Rubavu sectors of the Rubavu District.

Dative Uzamukunda’s house at the base of the mountain was completely destroyed by the lava.

“Even those who managed to salvage some items lost them on the way as the lava was rushing down on us quickly,” Uzamukunda told Rwanda Today.

The displaced residents were offered temporary shelter in tents, churches and stadiums.