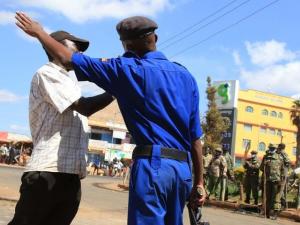 The media fraternity has asked the government to train its guns on perpetrators of violence instead of issuing directives that interfere with its freedom.

The Kenya Media Sector Working Group has taken issue with the new directives on political gatherings that were issued by the National Security Advisory Committee (NSAC) on October 7 and adopted by the Cabinet on October 8.

The group, which includes the Media Council of Kenya, the Kenya Editors Guild and the Kenya Union of Journalists (KUJ), is concerned by constraints on media reporting of political events, which it says are retrogressive and cause unnecessary interference with the work of the media and Kenyans’ access to information.

KUJ Secretary-General Erick Oduor asked the national government to stop interfering with the media and instead arrest and prosecute perpetrators of the violence that has pushed the government into action by way of the new rules.

Speaking to the press in Kisumu County on Monday, Mr Oduor said it is unfair to ask the media to be responsible or liable for any content it airs that will be deemed as inciting the public.

“We are conscious of the threat posed by reckless political activities and utterances and have enough internal mechanisms to deal with this. The government should go for the hate mongers, not the media whose work is to disseminate information,” he said.

He noted that the group is simply giving the government its view on the directives and is yet to take any action against it.

The society wants the court to declare the directives unconstitutional and illegal, due to violation of freedoms, and prevent Inspector-General of Police Hillary Mutyambai or any other police officer from enforcing them.

Mr Omwoyo said it is shocking that the NSAC and the Cabinet are proposing curbs on media reporting of political activities without reference to the independent media regulator recognised and established by Article 34 of the Constitution, Media Council Act, 2013 and the Kenya Information Communications Act.

“This indicates a dangerous trend where security agencies may assume powers that amount to curbs on media freedom," he said.

“The directives will greatly erode gains made in strengthening a free and responsible media industry. That is why we want them reviewed."

Rosalia Omungo, CEO of the Kenya Editors Guild, noted that journalists learnt lessons from the 2007-08 post-election conflict, that went a long way in guiding reporting on violence and political tensions.

Ms Omungo noted that these lessons are captured in the Code of Conduct for the Practice of Journalism in Kenya under the Media Council Act.

“Any breaches of the ethical guidelines in reporting under the current political environment are best addressed under the established mechanisms, including the Media Complaints Commission, rather than by giving security agencies unchecked powers to control the media,” she said.