Finally Bruce Melodie Performs In Burundi After Tussle With Promoter 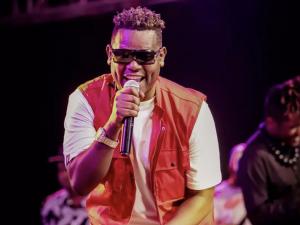 Rwandan singer Bruce Melodie held a historic concert in Burundi’s capital Bujumbura city, but after a long tussle with a Burundian businessman who wanted him to repay his money and compensate him for his losses after he booked the musician for a December 2018 perforrmance but he never showed up.

The businessman and music promoter named Toussaint Bankuwiha wanted Bruce Melodie, real name Bruce Itahiwacu, to pay back the advance of $2,000 he gave him and about $14,000 in losses, about 30m Burundian francs, which the singer agreed to pay after lengthy negotiations, but the businessman would later change his ask to 60m Burundian francs, complicating further the situation.

The development follows, arrest of the Katarina hitmaker by Burundian police on arrival in Bujumbura on charges of extortion on Wednesday 31.
Media reports indicate Bruce Melodie, was arrested while exiting Melchoir Ndadaye airport in Bujumbura, and asked to reimburse Fbu30Million to the Burundian businessman only known as Bankuwiha.

According to Pierre Nkurikiye, spokesman for the Ministry of Internal Affairs, Bruce Melody was detained by police accused of fraud after he scheduled to perform in Bujumbura in 2021, but he later cancelled his tour, which was led by Toussiant who claimed refunds.

After the reimbursement of Fbu30Million, the singer was again arrested on his way and asked to pay damages worth Fbu12Million

However, Melody’s manager says Bankuwiha bribed Burundian authorities with Fbi10 million for the arrest of the singer, who finally asked him to pay Fbu30Million for him to be allowed to continue with his show.
“Melody has been betrayed. They bribed officials with over Fbu10million. I knew that after arriving at the airport. The betrayal plans were planned before the concert,” Gael told the local media.

“We have given them Fbu30Million. They stopped us again while on our way and demanded more Fbu30Million to make a total of Fbu60milion. This is horrible,” as Gael added.

After releasing him, Bruce Melody posted a video saying the show continues, nevertheless.

“That is over. They asked me to pay, Fbu 30 million for simplifying the case, we paid. After they also told me to pay another Fbu 30 Million. We negotiated……,” Melody told Burundian media.