First made in Rwanda smartphone to hit market in two months 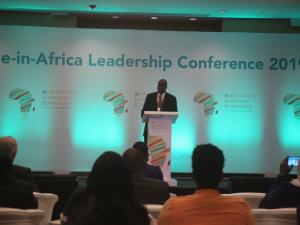 Locally made smartphones by Mara Corporation will be available on the local and international markets within two months, Ashish Thakkar, the company’s chief executive said on Thursday.

He was speaking at the inaugural Made-in-Africa Leadership Conference in Kigali, which brought together senior executives and business leaders from across the continent.

Thakkar was speaking during a session dubbed, “From trading to legacy-building: Creating lasting products and companies in Africa”.

Among the key issues being discussed at the two-day conference include challenges and opportunities in leading and expanding businesses in Africa, sustainable leadership in SMEs, African leadership in scientific research, financing company growth on the continent, and building a sustainable Pan-African business.

Thakkar said the construction and setting up of the factory, at the Special Economic Zone in Gasabo District, are in the final stages.

“The Mara phones factory in Rwanda will employ at least 200 people from day one, 16 per cent of whom will be women,” he said. “This is in line with the Sustainable Development Goals.”

The Made-In-Rwanda smart phones are expected enhance access to digital services and further deepen internet penetration in the country.

The business leader said they will have different models, retailing at varying prices between $100 and $200. He added that some of the phones will be for the Rwandan market while others will be for foreign markets within Africa.

Those designed for other markets elsewhere on the continental, Thakkar said, they will have a Made- in-Africa logo, while those for the local market will bear two logos; Made-in-Rwanda and Made-in-Africa.

Mara Corporation, which owns Banque Populaire du Rwanda (BPR), also has a smartphone factory in South Africa where it invested $100 million, he said.

The smartphones that will soon be manufactured in Rwanda, he said, are “affordable and of high quality.”

Meanwhile, Rwanda Convention Bureau chief executive Nelly Mukazayire told the business leaders that Rwanda was open for business, urging them to invest in the country.

Rwanda recorded $2.006 billion in domestic and foreign direct investments last year, surpassing the target by $6 million. This represented 20 per cent more receipts than the $1.675 billion registered in 2017.