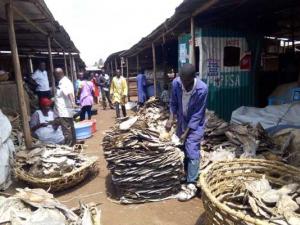 Kenyan traders say they are stuck with at least 300 tonnes of fish destined for export at the Ugandan border due to an ongoing row between Kampala and Nairobi.

Mr Hassan Ahmad, a fish exporter, at the weekend said he delivered a truckload of salted fish from Lake Turkana in Kenya to the Busia-Kenya fish market, but none of his customers is willing to buy.

“Every week, I have been delivering about 12 tonnes of fish to this market, but for the last two weeks, I have not exported any fish to DR Congo because I am not sure of the safety of my goods,” Mr Ahmad said.

He wondered how he will raise money to pay off the driver and the owner of the truck he hired.

According to Mr Hassan Omari, another trader, “it remains unclear if the 300 tonnes of fish will ever be exported.”

Fish from Uganda or Kenya?
According to FPU, the fish impounded last month was immature and from Ugandan lakes, which had been smuggled to Kenya, processed and repackaged for export.

Ms Joyce Ikwaput, the director of Fisheries at the Ministry of Agriculture, Animal Industry and Fisheries, claimed the fish was from Lake Kyoga in central Uganda.

But Mr Omari fears Ugandan authorities might impound whatever fish they intend to export to DR Congo after the Fisheries State minister, Ms Hellen Adoa, said: “they will not be pressured to have the fish released.”

“Uganda should first have investigated and then written a formal report to Kenya rather than moving to impound the fish,” he said.

He further expressed fear that if the matter is not resolved, Nairobi might retaliate by targeting some Ugandan goods sold to Kenyans or goods imported and exported through the Kenyan territory.

Mr David Ogeya, another fish exporter, said the impounding of the fish by one of their major trading partner states was against the East African Community protocol on free trade.

“We have several used cars coming into Uganda through Kenya, which we have never impounded but are wondering how Uganda can be involved in stopping our fish in transit through its territory into another country,” he said.

The seizure of the fish threatens to draw Kampala and Nairobi into another trade row, following the former’s ban on Ugandan goods in recent years, including milk, sugar, sugarcane, eggs and most recently, maize grains on grounds that they were substandard.