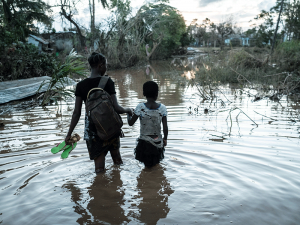 Flooding in Tanzania has killed five people and forced about 2,500 to flee their homes after a week of torrential rain in the country's south, an official said Friday.

Schools have closed in Kyela, a district on the border of Lake Malawi, and families fled to shelters after losing everything in the rising waters.

"The damage from these floods is enormous," Salome Magambo, the district's administrative secretary, told AFP.

"Since the beginning of the week we have reported five people killed and 2,570 homeless, some of whom are staying with friends or in schools and churches."

Food and medical services have been extended to those stranded, she added.

Farming land in the district known for its rice production has also been inundated, destroying crops and raising fears of food shortages in coming months.

In April 2018 at least 14 people were killed in torrential rains and flooding in Dar es Salaam, Tanzania's economic capital.