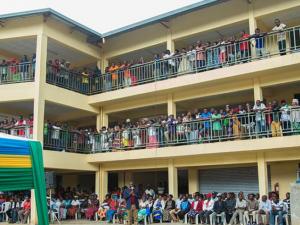 The residents who occupy two zones of Kangondo I and Kangondo II – which make up Bannyahe – dragged the district to court over a dispute that arose from the process to expropriate them to pave way for the development of a modern estate in the area.

As expropriation for their homes, the district offered them new houses in an upcoming estate in Busanza in Kicukiro District.

Some of the residents challenged this, saying that instead of taking the new homes, they would rather be given money so that they settle elsewhere.

Appearing before court on Wednesday morning, the district lawyer told court that the plaintiffs breached several legal procedures in filing the case to court hence calling for the dismissal of their application.

Gasabo District lawyer Justin Niyo Rushikama submitted that the residents never petitioned the authorities above the district before bringing the matter to court, a requirement in adjudication of administrative cases.

“The residents never petitioned the City of Kigali, as the authority above Gasabo District, to tell them about their misunderstandings with the district,” said the advocate.

Rushikama also submitted that the residents have four representatives in the case who are neither lawyers nor close relatives as stipulated in the law.

“The law requires that it is only a close relative or a lawyer who may have the power of attorney to represent someone in a court. This procedure was breached in this case,” he added.

Rushikama argued that moreover the filing submitted by the applications does not exactly show the details of the plaintiffs which he said ought to be the case.

“We’re told the applicants are 728 but there is no address or any other details about them. Neither have all paid court fees while filing the case” Rushikama said.

In defence against Gasabo District’s submission, Boniface Nizeyimana and Innocent Hagumakubaho, representing the residents, told court that they made an administrative appeal to the Ministry of Local Government.

“Local government ministry is an authority above the district,” he said, adding that they did not have to all be present in court, since a single ruling on the matter would automatically affected all of them.

On 11 February 2019 court will decide whether to continue to hear the case in substance or to drop it as requested by the defence side.

District authorities have previously said that they opted for the swap arrangement over giving the residents cash to ensure they do not end up developing a slum elsewhere.