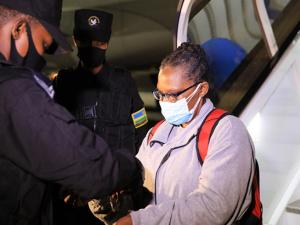 Genocide suspect Beatrice Munyenyezi arrived in Rwanda on Friday, April 16, after being deported from The United States.

Munyenyezi was in the past sentenced to 10 years for fraudulently obtaining US citizenship and entering the United States and securing citizenship by lying about her role in the genocide against the Tutsi.

Munyenyezi also denied affiliation with any political party, despite her husband's leadership role in the extremist Interahamwe militia.

She was recently released from prison after she completed her sentence.

Upon arrival on Friday, the suspect was handed over to the Immigrations Office before being delivered to Rwanda Invetogation Bureau (RIB).

He added: "This comes at a time when there is an indictment against her for her alleged role in the genocide against the Tutsi."

During the genocide, in the now Huye District, Munyenyezi would stand on roadblocks and check identifications to identify Tutsi.

She would then single them out and hand them over to Interahamwe militia to be killed. For women, she would first ask the perpetrators to rape them before killing them.

On one occasion, according to RIB, Munyenyezi commanded Interahamwe to rape one nun whom she later killed using a pistol.

Munyenyezi is the wife of Arsene Ntahobali, who, together with his mother Pauline Nyiramasuhuko, were sentenced to life in prison by the International Criminal Tribunal for Rwanda for their role in the Genocide against the Tutsi.

According to RIB, the suspect will be detained at Remera RIB station as investigations continue, before sending her case to prosecution.