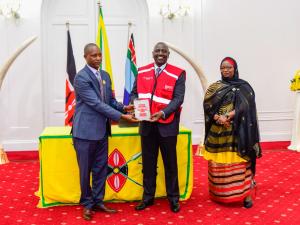 The government has released Sh2 billion towards food relief in counties hard hit by drought.

President William Ruto made the announcement at an event at State House, Nairobi on Thursday where he was installed as the Patron of the Kenya Red Cross Society.
He urged well-wishers and development partners to raise a Sh10 billion for the cause.

The Sh 2 billion allocation comes months after another Sh3.2 billion was released by the government towards the purchase of relief food.
“We are making available another Sh2 billion to support food distribution to the affected areas. We are working with development partners to raise another Sh10 billion to ensure no part of the country is unfairly affected by drought,” said Ruto.

He said the Kenya Red Cross Society (KRCS) will continue playing an integral role in the efforts to mitigate the drought which has affected 20 of the 23 counties categorized as Arid and Semi-Arid Lands (ASAL).

President Ruto said KRCS will be allocated Sh260 million out of the Sh2 billion targeted for the relief exercise.
The Head of State also announced that Sh200 million will be allocated to the Kenya Wildlife Service to undertake water trucking for wildlife in Kenya’s national parks and reserves.

The ongoing drought is attributed to four successive failed rainy seasons.
The number of people in need of humanitarian assistance currently stands at 4.35 million, based on the 2022 long rains food and nutritional security assessment report.

The remaining three counties including Baringo, West Pokot, and Lamu are in the Normal drought phase.
https://nairobinews.nation.africa/government-donates-sh2-billion-towards...