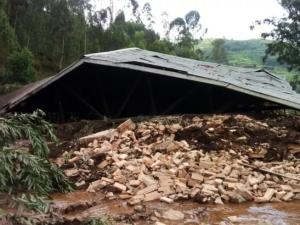 Heavy rains that ravaged many parts of the country Wednesday night claimed the lives of at least 17 people in just two districts. According to officials, at least nine people have been confirmed dead in Gakenke District and eight in Nyabihu District.

The rains, according to officials from the two districts, destroyed a number of houses and damaged properties which include crops and public infrastructure, notably inter-districts roads and bridges.

The extent of the damage had not been fully assessed by the time this report was filed.

Speaking to The New Times, Déogratias Nzamwita, the mayor of Gakenke District, said that the death toll and other damages were likely to go up, given that the rain had not ceased by Thursday morning.

“Figures we are giving are provisional and could go up; for instance, the death toll was six at 6.00 a.m but as we speak we have recovered three more residents killed by the rains,” he said during the interview on Thursday morning.

Musanze-Vunga roads that link most parts of Musanze, Nyabihu, Gakenke and Muhanga Districts, is impassable as it was destroyed by floods on Thursday. / Courtesy

According to Nzamwita, all the victims were reported in Muzo Sector which was most hit, especially by landslides which swept away their houses during the night.

“There are about three streams flowing from Muzo hills that are behind the fatal incident; the streams flooded and subsequently brought about landslides that swept houses, killing occupants on the spot," said the mayor.

Nzamwita added the Gakenke-Janja feeder road had been blocked noting that hectares of crops that were yet to be assessed were also wiped out by floods in various wetlands in the district.

He also noted that the main road that links the district with Muhanga District via River Nyabarongo was also impassable by press time.

Nzamwita added that grassroots leaders had been tasked to evacuate survivors and help residents cope with the situation so as to prevent further fatalities and damages.

Meanwhile, the rains also claimed the lives of eight residents from Shyira and Rurembo Sectors in Nyabihu District.

Speaking to The New Times, the District vice mayor for social affairs, Pascal Simpenzwe noted that besides the lives lost, the district was assessing a number of hectares of various crops that were destroyed and public infrastructure that includes roads and bridges.

“As we speak, we are trying to access all affected areas but it is hard because a number of roads have been rendered impassable, fatalities and other damages are likely to go higher because it's still raining in many parts of the district," he said.