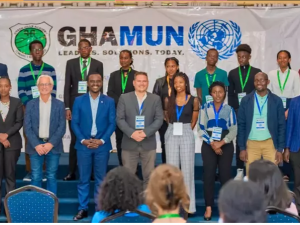 Green Hills Academy last week organised a Model United Nations (MUN) conference, to motivate learners to engage in dialogues with view to finding solutions to global issues and an opportunity to network.

The two-day conference held under the theme, “the future belongs to those who prepare for it to day”, ended last Saturday, June 4. It was the second annual model UN conference to be held at the school.

The MUN Club is an assimilation of the United Nation, which provides an opportunity to the young people who aspire to become future leaders, to nurture their skills in critical thinking, debate, diplomacy, problem solving, and public speaking among others, on how they can deliver a better world in the future.

The delegates were divided into four committees; Human Right Council, Security Council, Youth Assembly and WHO, after which they started to discuss various issues related to the committees in which they had been placed.

While opening the session, Daniel Hollinger, the school head said that young people who put much efforts to be part of such conferences today gives hope for them to become better future leaders.

“The choices you make today and skills you develop through MUN conferences will inspire you to become leaders that our world need,” Hollinger said adding that the forum is an opportunity for students to get to know each other, network and horn their communication skills.

He added that the conferences are a rare opportunity for any individual, urging students to take advantage of them and use the skills acquired everywhere they go, to make the world a better and more peaceful place.

According to Hassan Kibirango, the programme manager of the “I Lead Rwanda,” and the guest of honour, young people have been given the space to lead into the future, and they should be confident enough to deliver solutions to problems facing the world today.

“A lot has fallen on your laps, you are the native to technology, where the things the elders saw in movies and were almost not achievable, is the reality today,” Kibirango said.

He stated that youth constitute 70 per cent of the world today in Africa, therefore they have a secret duty to lead the world into United.

Vidit Goel, a participant from Ecole Ruban Vert from Gabon, said this is a great way to create new friendships and connections, but also a great way of learning other skills, such as confidence, critical thinking, negotiation skills and communication.

Through this, Gowel believes that many upcoming leaders will gain knowledge about global affairs starting from what is happening in their communities, which he said makes them effective leaders once they assume the mantle.

Divine Kamikazi, a participant from King David Academy, said such fora are important for aspiring leaders.

“This has helped me upgrade my public speaking, and also helped me really understand what the world is facing today, to be able to come up with solutions together with others,” Kamikazi said.

The issues discussed by the groups included discrimination against minority groups, cyber security, quality education and overcoming the challenges brought about by the Covid-19 pandemic.

Racheal Turigye, the Director of Green Hills MUN club concluded that having students as delegates discuss some of these issues that affect the world today will set them up for leadership roles in the future.

“We find MUN conferences very critical in unleashing opportunities to learn outside of the classroom set up…we plan to sustain them and invite more delegates from other schools as years go by,” Turigye said.