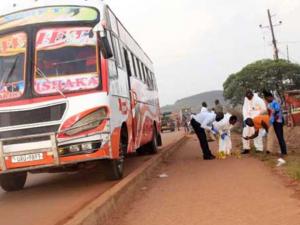 Investigators are still scouring for leads days after two explosions at a city bar and onboard a moving bus in Mpigi town in Uganda killed two people and injured a senior police officer.

Four and six days following the Komamboga pork restaurant and Kampala-Masaka highway blasts, respectively, police and other security agencies have no information about the identities of the attackers.

The masterminds, according to analysts, exploited a security loophole and detonated an Improvised Explosive Device (IED) last Saturday at Uncle Sam’s and Ronnie’s pork joints at about 9pm because merrymakers were

milling at the place which, like nearby seven other sandwiched hangouts, were open past curfew hours and in violation of a presidential ban on operation of bars.

The targeted eatery had no guard on duty, no access control and no Closed-Circuit Television (CCTV) cameras giving, in the words of detectives, an opportunity for the attackers to conduct dry runs on their target and leave the scene undetected.

Investigators intimated to the Daily Monitor that Uncle Sam Lule’s pork joint at Kwata Zone in Kampala’s northern Kawempe Division was an ideal target which claimed the life of waitress Emily Nyinaneza because of a laissez-faire conduct of business.

Police said the venue didn’t have walkways or a security guard to ensure that security protocols are followed.

According to the police spokesperson, Mr Fred Enanga, the area had at least 10 pork restaurants owned by different people, and who were in competition for customers.

Eyewitnesses and the police at Komamboga in Kampala say the suspects had visited the area at least two times. This probably gave them time to carry out dry runs and identify security weaknesses.

Gen David Muhoozi, the former Chief of Defence Forces and the current State minister of Internal Affairs, yesterday told Parliament that the suspects visited the bar when revellers were busy watching an English premiership game on television.

The Police spokesperson, Mr Fred Enanga, too said during their last minutes of planning, the attackers --- who witnesses said numbered three --- bought drinks for other revellers in an apparent scheme to create rapport.

They occupied a table that was near a wall that gave them a good cover. It was near the wall that they surreptitiously planted the IED before they departed.

Gen Muhoozi said a waitress, Emily Nyinaneza, even after seeing a red flashing light of the device, still sat at the table to protect the drinks of the trio who had vanished.

“When Derrick Nandabi [ a reveller] saw the flashing lights, he inquisitively asked Emily Nyinaneza about them. They both bent down to examine the item and this is when the object exploded,” Gen Muhoozi said in a statement to the lawmakers, the first detailed government account of how the blast happened.

The suspects targeted an area not close to any police or CCTV cameras, the available being distant footage captured on them but in poor quality and less helpful to investigations.

The closest police CCTV camera was half-a-kilometre away and across five feeder roads that connect to a network of other un-gazetted pathways.

The Ugandan security forces had to rely on eyewitnesses for their investigations. At least four of them, who saw the suspects and interacted with them, are under police protection for their security and also to help with identifying the culprits.

The crime scene is at the border of three police divisions; Kasangati, Kawempe and Kira Road, and following the explosion, each commander disowned the jurisdiction of the place.

Questions about why law enforcement, in line with a subsisting presidential directive, left bars that should have been closed to operate and in addition past curfew hours, left the police exposed and two of its officers in custody.

Komamboga Parish chairperson Herbert Kimbugwe said despite the huge numbers of revellers, the hangouts for unexplained reasons didn’t have a presence of police.

He said although police patrol cars would once in a while park near the area, their focus was on enforcement of the curfew among motorists on Waliggo Road.

In the Swift Safaris Coach blast at Lungala in Mpigi District on Monday, the bus company manager said there were many loopholes that the suspects exploited.

Mr Umar Ddungu of Swift Safaris Coach said they load passengers in a bus park owned by another company that is also in-charge of security checks.

“The terrorist used sophisticated devices. I believe the private security personnel and our teams don’t know what they were looking for during the search. We had a regional police commander on board who is an expert [in crime detection and prevention], but he also didn’t detect it,” he said yesterday.

Mr Ddungu added that the tough security checks were relaxed at many bus parks during the Covid-induced lockdown where the back-to-back suspension of public transport rendered access control enforcers jobless and when the business resumed, there was less appetite to be rigorous with returning passengers for fear of spreading the pandemic.

“Passengers don’t want to be touched or their property for fear of the spread of the virus. Now the security personnel have to enforce Covid-19 guidelines as well as testing everyone’s temperature. It has been hard to enforce other security protocols,” he said.

Terror warning
On October 8, the Islamic State group claimed its first attack in Uganda, a bomb attack against a police post in the Kawempe area, near where Saturday’s explosion occurred.

In a statement issued through its communication channels, the group claimed a unit from its Central Africa operation had detonated an improvised explosive device that resulted in injuries and damage to police infrastructure.

No explosion or any injuries were reported by authorities or local media at the time, though police later confirmed a minor incident had occurred without providing further details.

However in the following days, both the UK and France updated their travel advice for Uganda, urging vigilance in crowded areas and public places like restaurants, bars and hotels.

"Terrorists are very likely to try to carry out attacks in Uganda. Attacks could be indiscriminate, including in places visited by foreigners," stated the advice from the UK.