How Tanzania changed tack in the fight against Covid-19 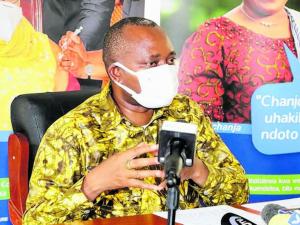 Dar es Salaam. After almost a year of Covid-19 denial, Tanzania changed tack in the fight against the pandemic in 2021 by reinstating scientific measures, including accepting vaccination that was previously perceived as being counterproductive.

However, measures like social distancing, wearing face masks, using hand sanitiser and frequent washing of hands with soap and running water are still widely ignored by people who were initially made to believe that Covid-19 is just like normal flu.

Immediately after President Samia Suluhu Hassan was sworn-in as Tanzania’s President, following the sudden death of her predecessor, John Magufuli, in March, she formed a team of health professionals who advised the government on the way forward regarding tackling the viral disease.

The team advised the government to resume releasing Covid-19 statistics and exploring the Covax facility for accessing jabs that are approved by the World Health Organisation (WHO).

Speaking to The Citizen, Ministry of Health, Community Development, Gender, Elderly and Children permanent secretary Abel Makubi said there were six major areas that Tanzania has recorded achievements in the fight against Covid-19 in 2021.

Prof Makubi said the first milestone was when President Hassan formed the team of experts to re-evaluate the country’s pandemic situation and come up with recommendations on what should be done on the way forward.

“That committee is the foundation of everything that came afterwards, because their recommendations included jabs, release of data and issuance of preventive measures,” he said.

Chaired by Prof Said Aboud, the committee, among other things, advised the government on how it could mobilise resources to control Covid-19 as well as the proposals for the vaccination strategy.

Although delayed, the Tanzanian government also accomplished to secure vaccines for its people, whose, Prof Makubi said, rollout has recorded a persistent increase each day as more people across Tanzania get the jab.

The first consignment of Covid-19 vaccines was the 1,058,400 doses of Johnson & Johnson that arrived in the country in July, following the donation through the Covax facility, in partnership with the United States of America.

In October, Tanzania also received 1,065,000 doses of Sinopharm from China, which was also part of the Covax initiative.

According to the manager in-charge of the National Vaccination Programme at the Ministry of Health, Community Development, Gender, Elderly and Children, Dr Florian Tinuga, in the period of four months since July, Tanzania has received nearly 4.4 million Covid-19 doses from Covax facility and other development partners.

Although less than 10 percent of the population has taken the jab so far, the Health ministry has reported an increasing pace of rollout especially in rural areas after many people became aware of the significance of the jab.

The Health ministry has been on the forefront educating people on the importance of taking the Covid-19 vaccines. Several health care centres across the country have been used as information centres for the vaccinations and the public can acquire more knowledge as to why they will need to be vaccinated.

Prof Makubi said the government has also been using health practitioners at all levels in the community to advocate for safe living, and massive media campaigns on the preventive measures such as mask wearing and using the first new guide to controlling congestion in public places without affecting economic activities.

Under the new administration, the government of Tanzania has also made a lot of improvements to its health care facilities in terms of physical infrastructure, technical and financial.

Prof Makubi said this includes procurement of Covid tests’ equipment to enable testing for travellers and individuals locally and those who travel in and out the country.

“Our Laboratories are also equipped with advanced tech and made capable of detecting any Covid-19 variant,” he said.

With the fears for the latest Covid-19 variant, Omicron, the government has assured the citizens that the state has the means to detect if any case emerges.

Tanzania tourism has been recovering since the opening up of its airspace in 2020. The gains were accelerated by vaccines and the new measures which increased confidence to the visitors in 2021.

However, in May that year, the government decided to reopen the airspace to bring back business opportunities, especially in the tourism and hospitality industries.

Between January and October 2021, the government reported a total of 716,169 tourists visited various attractions in Tanzania, a significant increase from 620,867 visitors during the whole of 2020.

Before the outbreak of Covid-19, which led to severe travel restrictions worldwide, the number of annual tourist arrivals in Tanzania hit a high of 1.5 million in 2019.

“We have succeeded in resuming international flights also because of the initiatives we have taken against the pandemic such as vaccinations which in turn have increased other countries’ confidence in us,” said Prof Makubi.

To help the Tanzanian economy recover from the adverse effects of the global Covid-19 pandemic, the International Monetary Fund (IMF) extended a total of $567 million as a loan, with $189 million of that being under the Rapid Credit Facility (RCF) programme, while $378 million was under the Rapid Financing Instrument (RFI).

The acquisition of these funds is also a great achievement for Tanzania providing it with more resources to handle economic woes that came as a result of the pandemic--a number of projects had been disrupted by the deadly virus.

During the launch of the Development Campaign for National Welfare and the Fight against Covid-19 in October, Finance Minister Mwigulu Nchemba said the money would be used to implement development projects in the education, water, health and tourism sectors of the economy.