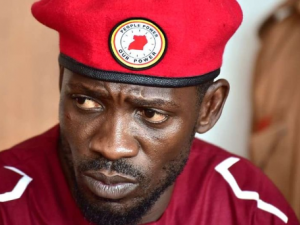 Kampala. Information has emerged about what happened between Ugandan police and media managers of NBS FM on the day popular singer and Kyadondo east MP Robert Kyagulanyi, also known as Bobi Wine, was dragged out of the premises over the weekend.

Apparently, police tried to break into the radio’s studios in Jinja but did not succeed. Their demands to the station managers to give access to the studios were rejected as illegal.

Mr Michael Muwanguzi, the manager of NBS FM, told the Daily Monitor that there was heavy police presence at the station before Bobi Wine arrived.

He said crowds of chanting supporters had gathered outside the building as the leader was live on air on a current affairs talk show titled 'ndabilwamu' (mirror), hosted by Mr Ibrahim Shamiru Byakika.

“The police entered the newsroom and went up to the studio where we were hosting Hon Kyagulanyi but because we have security locks on the door to the studio, they could not access him,” Mr Muwanguzi said.

Police spokesperson, Mr Fred Enanga, denies that police had entered the station. He insists that they only deployed outside to guide the musician out of the city safely.“Our team did not enter the station, they were outside. You can find out from the station. Because some hooligans had surrounded the station, we only wanted to make sure Bobi Wine was brought back to Kampala without causing crowds gathering around,” Mr Enanga told the Daily Monitor.