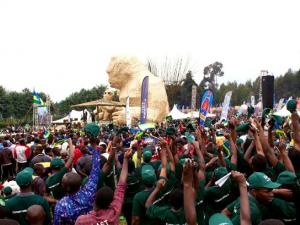 Pomp and Fanfare have been up the foothills of the volcanoes national park as Rwanda marks the 15th edition of the annual Gorilla naming ceremony – Kwita Izina.

The world has flocked to Rwanda to celebrate the world rare species – the Gorillas. Once critically endangered, Rwanda is celebrated for restoring life and hope for the Gorillas in the mist.

Kwita Izina – a traditionally-backed ceremony, takes place every September of the year, where world celebrities are invited to name baby Gorillas born every year.

This morning, President Paul Kagame travelled to Musanze district to join thousands of Rwandans, global celebrities and friends of Rwanda in the Gorilla naming ceremony.

In the early 1990s, the park became a battlefield for the country’s civil war which paralysed tourism until 1999.

In 2005, in a bid to boost conservation in the park, Rwanda introduced the annual gorilla naming ceremony, which has significantly contributed to the rise in gorilla population in the volcanoes.

Up to 281 baby mountain gorillas have so far been named since Kwita Izina began, according to Rwanda Development Board (RDB).

Ahead of the naming ceremony, there are various activities organised for a whole week to celebrate the importance of conservation and the role of tourism in protecting rare and iconic species.

Today, Kwita Izina is fast becoming Africa’s leading dialogue on conservation and sustainable tourism, thanks to the role of the Government to highlight the importance of conserving the gorillas which once were classified as “critically endangered.”

As a result, the number of mountain gorillas has reached a new milestone, rising from 240 to 604 in the last 30 years in Virunga Massif, according to the latest census.

A separate population of 400 individual gorilla brings the total number of mountain gorillas to just over 1,000.

Clare Akamanzi, the Chief Executive Officer of RDB, says that the increasing gorilla population in the Volcanoes National Park is proof of the strides that Rwanda has made in gorilla conservation, attributing the success to the collaboration of conservation partners and members of the community surrounding the park.

“Initiatives such as the Kwita Izina play a major role in conserving gorillas. Thanks to the conservation efforts, we have been able to improve the gorilla trekking experience for our visitors and also increase the amount of support we have given to the local communities through the revenue sharing programme,” she says.

“It has always been about protecting our natural heritage, providing world-class experiences that highlight the diverse natural beauty of Rwanda while ensuring that Rwandans benefit from this tourism and conservation. No one has been left behind,” she notes.

The official status of mountain gorillas has just been re-classified, from “critically endangered” – the highest level of threat – to “endangered,” moving them a level further from extinction, thanks also to the role of the park leadership.

Latest statistics show that because of the continued efforts to conserve gorillas, sales revenue from Gorilla trekking in Volcanoes National Park has been growing over the years. Revenue grew by 25 per cent in 2018 to $19.2 million from the previous year.

A family of mountain gorillas relax in their natural habitat in Virunga National Park in June 2015. / File

Prosper Uwingeli, the Chief Park Warden of Volcanoes National Park, believes that government initiatives have helped conserve gorillas and drive the growth of the park and the tourism around it.

“The park has transformed largely because of the Government’s belief that tourism can drive up the economy and change the lives of the people. When the country established law enforcement mechanism in the park, for instance, the idea was to conserve the gorillas as the dominant species that were at risk at the time,” he notes.

“We also know that programmes like the park revenue sharing scheme adopted by Rwanda were in part to continue involving communities to be part of the conservation efforts. These, combined with other initiatives, have driven the conservation of gorillas and other species,” he adds.

Uwingeli notes that today more people visit gorillas and there are a host of thriving activities beyond gorilla trekking.

This includes the golden monkeys and mountain hiking, which is increasingly becoming popular even among locals.

In 2015, the Government initiated a revenue sharing programme with an aim to guide investment in the areas surrounding the various national parks in the country by ensuring that a percentage of all park revenues is ploughed back into the communities.

Initially, only 5 per cent of the park revenues would go to surrounding communities, but this has grown to 10 per cent.

So far, over Rwf5.2 billion has been disbursed by RDB to 647 community-based projects since then.