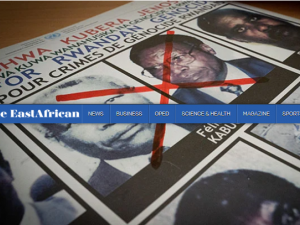 Following the surprise arrest of one of the world’s most wanted fugitives and alleged financier of the 1994 Genocide against the Tutsi Felicien Kabuga, on May 16 in Paris, the drama has now moved to court.

On May 19, Kabuga appeared in a French court in Paris in a wheelchair, dressed in jeans and a blue jumper and wearing a face mask. Accompanied by his family, Mr Kabuga spoke in a shaky voice through an interpreter, as he preferred to speak in Kinyarwanda, confirming his name and saying he was born in 1935.

It was a procedural court hearing to pass the case to investigative judges who will decide whether to hand Kabuga to a United Nations court handling crimes against humanity.

The court on Thursday May 21, decided to delay until next week the hearing on whether to hand Kabuga to the UN’s International Residual Mechanism for Criminal Tribunals based at The Hague.

Reports by AP say Kabuga’s defence lawyer Laurent Bayon said in a statement to the court that Kabuga wished to be tried in France, citing health reasons. He did not give details.

“We have eight more days to prepare his defence,” Mr Bayon said.

“It is unacceptable to do such a fast procedure when justice has waited for 25 years. Justice can wait another 10 days before wanting to send it I don’t know where,” the lawyer added.

Earlier, Serge Brammerzt the chief prosecutor of the United Nations International Residual Mechanism for Criminal Tribunals (IRMCT or Mechanism) had filed an urgent motion before Judge Carmel Agius, President of the UN Tribunal, to have Kabuga temporarily transferred to its branch at The Hague instead of Arusha, in light of the current Covid-19 pandemic challenges.

The Mechanism is still based in Arusha where it replaced the lapsed International Criminal Tribunal for Rwanda and has an Appeals chamber in The Hague.

In a letter dated May 20, chief prosecutor Brammertz asked the Mechanism to pursue an urgent amendment of Kabuga’s arrest warrant for the transfer to be carried out, signalling that the suspect’s trial is most likely going to be held in the Netherlands, at the Mechanism’s Appeals chamber in The Hague.

“The current warrant provides for the transfer to the Arusha branch of the Mechanism upon arrest. However, in light of the Covid-19 pandemic, a transfer from France to Tanzania, if even possible, bears a number of practical challenges due to pandemic-related restrictions in both France and Tanzania,” Mr Brammertz says in the letter.

He added: “In contrast, transfer to The Hague branch remains possible despite the current travel restrictions. To avoid any uncertainty created by the pandemic, the arrest warrant should be amended to provide for temporary transfer to The Hague. This would ensure that Kabuga can be immediately transferred to the Mechanism’s custody, following appropriate procedures in France.”

He argued that a transfer to The Hague would also mitigate any delay arising from potential litigation before French courts.

Mr Kabuga, was arrested in an apartment in the Paris suburb of Asnieres-Sur-Seine on May 16, after evading justice for 26 years.

With him in court were his sons Gilbert Kabuga, Fabien Singaye and his son-in-law Leon Habyarimana.

Kabuga’s defence lawyers, Mr Bayon and Emmanuel Altit, said in a statement that their client wished to be tried in France on grounds of ill-health and was opposed to his transfer to the IRMCT in Arusha.

“It is unacceptable that Kabuga is presented as one of the principal Rwandan genocidaires by a joint press release to the prosecution and the national gendarmerie disseminated on May 16, when his trial did not take place. The same goes for the national gendarmerie which, obviously, disseminated an image taken at its place of arrest without consent,” the statement reads.