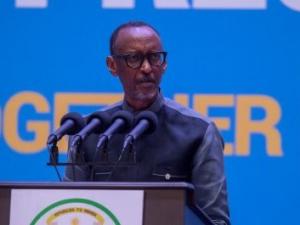 President Paul Kagame has requested Rwanda National Police (RNP) and other relevant institutions in charge of road safety to make reforms helping the general public to move smoothly at a moderate speed that do not lead to accidents.

Kagame made the request following mixed reactions among members of the public complaining about low speed limits with accompanying speeding fines in Kigali city.

The uproar emanated from the recent changes where drivers with the speed above 40km/hr were slapped traffic fines.

As he delivered remarks at the celebration of Tax Payers Appreciation Day 2021, Kagame reminisced on the controversial speed limits which triggered mixed reactions and called on relevant institutions to make adjustments.

“I get updates through the media. I have been following up. The majority of you, got here by vehicles. You might have paid taxes along the road,” he said.

Kagame said, he is aware that people have been complaining about low speed limit that saw many of them fined.

“People have been complaining about excessive traffic penalties for speed limits and paying fines for going beyond 40km/h. That is the same speed as those of us who are used to walking,” he observed.

“I have spoken to National Police. The speed should not be so high that it leads to accidents, nor should it be so low that people never get where they are going,” added Kagame.