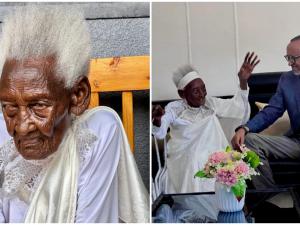 President Paul Kagame has responded to an invitation from a 110-year-old woman, Rachel Nyiramandwa, who had requested him to visit her at her home in Nyamagabe District.

The President honoured the invitation of Nyiramandwa, on the morning of August 26 ahead of meeting residents of Nyamagabe District. Nyiramandwa first met the President in 2010 during the presidential campaigns

Commonly known as "The Listener”, she lives in Ngiryi, a small village tucked away in Gasaka Sector in the hills of Nyamagabe, approximately four hours from Kigali.

Five years ago, she became a social media sensation after she was photographed greeting and whispering to an attentive President Kagame during one of his presidential campaign rallies.

In an earlier interview with The New Times, Nyiramandwa revealed that she had personally invited President Kagame to pay her a visit in a bid to showcase what her local community had achieved.

From Nyiramandwa’s house, Kagame headed to Nyagisenyi stadium where he met with thousands of the district residents as part of his citizen outreach programme.

Meanwhile, prior to the events of August 26, the president had the previous day met with over 800 opinion leaders from Southern Province. During the meeting that was held in Huye town, he challenged them to continuously assess themselves as a measure of commitment to work and avoidance of mistakes.

“When you have shame, you keep assessing yourself and it triggers a commitment to not make the same mistakes again,” Kagame challenged opinion leaders.

Kagame is on a four-day tour in Southern and Western Province meeting residents and opinion leaders in the two provinces.