Kagame in Indonesia for G20 summit 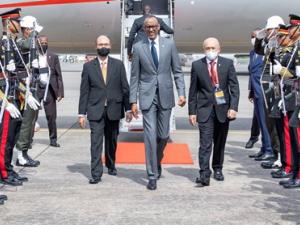 President Paul Kagame arrived in Bali, Indonesia on November 14, where he joins world leaders for this year’s G20 summit.

Kagame will be attending the annual meeting of leaders from the world’s major economies, known as Group of 20 nations, in his capacity as the Africa Union Development Agency (NEPAD) Heads of State and Government Orientation Committee.

Under the theme “Recover together, Recover Stronger”, the two-day summit will be hosted under the flagship of Indonesian G20 presidency.

“Over the last one year, G20 focused on the global COVID-19 pandemic and how to collectively overcome its related challenges,” a statement reads in part.

The gathering of officials that represent more than 80 percent of global GDP and 75 percent of exports worldwide marks the 17th meeting since the platform kicked off.

Nineteen countries and one economic region, the European Union, will attend this year’s two-day G-20 meeting.

This year’s in-person attendee list has been in the spotlight as the world grapples with effects of the Ukraine-Russia crisis.