Kagame named among most conversational world leaders on Twitter 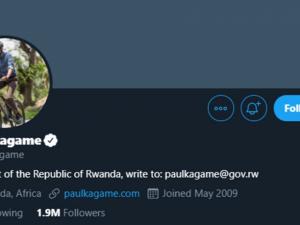 President Paul Kagame has been ranked amongst the top, most conversational world leaders on Twitter, especially during the Covid-19 pandemic when global diplomacy went digital.

This is according to the latest research, which analysed how world leaders, governments and international organizations communicated via social media during the Coronavirus pandemic.

The Twiplomacy Study showed that Kagame’s account is among the most conversational, with 74 per cent of its past 2,125 tweets directly replying to questions from Twitter users.

President Kagame, Norway’s Prime Minister Erna Solberg and Félix Tshisekedi, the President of the Democratic Republic of Congo, use their Twitter feeds mainly to chat publicly with their followers.

Kagame is the second-most followed president in Sub-Saharan Africa on Twitter with 1.9 million followers, and counting – just behind Muhammadu Buhari of Nigeria, who has 3.1 million followers.

Kagame’s Twitter follower growth was 31 per cent, Burson Cohn & Wolfe (BCW) indicated in its latest report, which covered the period when Coronavirus emerged in Mid-March until June.

President Kagame was among a handful of world leaders who participated in the safe hands challenge initiated by the Director-General of the World Health Organisation (WHO), Dr Tedros Adhanom Ghebreyesus.

The campaign was designed to show how thorough handwashing is the most effective way to slow the spread of the coronavirus. Leaders also called out their peers to set an example and record a video of themselves washing hands.

When Rwanda registered its first Covid-19 case, Kagame took it to his personal Twitter account to encourage people not to panic, but to observe health safety measures put in place, including washing hands frequently, avoiding handshakes, and practising social distancing.

The traditional work of world leaders and diplomats has come to a sudden stop as travel restrictions, border closures and shelter-in-place orders have scuppered in-person diplomatic activity.

No more handshakes, hugs or accolades. No more physical meetings, bilateral summits or multi-lateral gatherings. World leaders and diplomats had to adapt to working from home and have been thrust into virtual meetings.

“Leaders who only half-heartedly embraced digital platforms are now actively chatting via Google Meet, Skype and Zoom calls and engaging their followers via Periscope,” the report said.

Kagame participated in a series of virtual meetings, including the G20 Leaders Summit, the Corporate Council on Africa Leaders Forum, the Extraordinary China-Africa Summit, and Extraordinary Intersessional Summit of OACPS, just to mention but a few.

According to the 2020 edition, the governments and leaders of 189 countries had an official presence on the social network, representing 98 percent of the 193 UN member states.

The governments of only four countries do not have a Twitter presence, namely Laos, North Korea, Sao Tome and Principe and Turkmenistan.

The heads of state and government of 163 countries and 132 foreign ministers maintain personal accounts on Twitter. As of June 1, 2020, all 1,089 personal and institutional Facebook pages of world leaders had a combined total of more than 620 million followers and had posted 8.7 million tweets since their creation.

Globally, US President Donald Trump is still the most followed world leader with more than 81 million followers and counting.

Indian Prime Minister Narendra Modi moves into second position ahead of Pope Francis who has 51 million followers on his nine different language accounts.