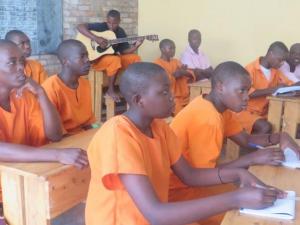 President Paul Kagame has exercised his prerogative of mercy to grant clemency to 18 minor inmates who were serving their respective sentences in the juvenile prison located in Nyagatare district in Eastern Province.

The decision was announced Tuesday in a communiqué released after a an extraordinary cabinet meeting chaired by President Kagame.

According to the communique, the beneficiaries to the clemency are those that displayed good conduct and scored highly in the national examinations at both primary and Ordinary Level.

They include 16 males and two females.

The clemency allows the young inmates to go out in society and pursue their studies in ordinary schools but they have to maintain a high level of discipline and avoid committing any other crime.

According to Senior Superintendent of Prisons Hilary Sengabo, the spokesperson of Rwanda Correctional Services, the clemency was extended to all inmates who sat exams and will be released and continue their studies out of the juvenile prison, revealing that all of them had been already placed in different schools by Rwandan Education Board (REB).

“They are going to be released immediately to continue their studies to the schools that admitted them,” Sengabo told The New Times on Wednesday.

The juvenile facility was launched in 2014, to accommodate inmates between the ages of 14 and 18, who are convicted of various crimes. It also offers secondary education and vocational training to the inmates.

The presidential pardon to juvenile inmates based on their academic performances and good conduct comes for the fourth time in a row since 2017.