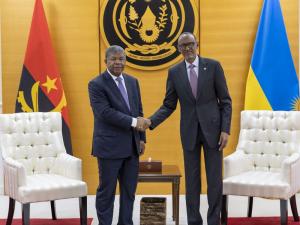 President Paul Kagame has received his counterpart of Angola and Chair of the International Conference on the Great Lakes Region (ICGLR), João Lourenço for discussions on matters of regional security.

Rwanda’s Presidency has revealed that Kagame received Lourenço on Friday 11th November 2022.
Lourenço is the mediator on escalating tensions between Rwanda and the Democratic Republic of Congo (DRC).

He comes to Rwanda amidst deteriorating relations between the two neighbouring countries where DRC has been accusing Rwanda of supporting M23 rebel group which continues to capture different areas in eastern part of the country.

Rwanda repeatedly refuted the allegations and advised DRC to solve internal problems instead of blame games.
Rwanda also accuses Congo of supporting the Democratic Forces for the Liberation of Rwanda (FDLR), a terrorist group with intentions to destabilize its security.

Lourenço’s is welcomed in Rwanda after the visit of Angolan Minister of Foreign Affairs, Téte António who arrived in the Country of Thousand Hills on Thursday.
António arrived in Rwanda from Goma where he met with military officers from the Expanded Joint Verification Mechanism (EJVM).

The EJVM is a mechanism of the International Conference of the Great Lakes Region (ICGLR) composed of military officers from the 12 member countries that is charged with monitoring and verification of border violations between DRC and neighbouring countries.
He was in the country to introduce Lieutenant General Nassone João from Angola as the new coordinator of EJVM.

All the visits align with Luanda Process to restore peace in the region, particularly to mend tensions between Rwanda and DRC.
https://en.igihe.com/news/article/kagame-receives-his-counterpart-of-ang...