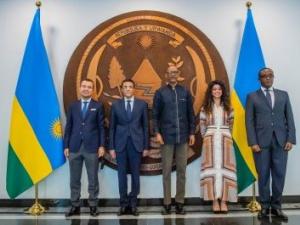 President Paul Kagame yesterday received Ahmed Samy Mohamed El-Ansary, the outgoing Ambassador of the Arab Republic of Egypt to Rwanda for a farewell meeting, the Presidency has revealed.

Amb. Ahmed who is concluding his tour of duty had presented credentials to President Paul Kagame in January 2018 to represent his country to Rwanda.

During his tour of duty, Ahmed strived to expand cooperation in areas of health and trade among others.

One of most recent activities include an agreement paving the way for the construction of a new heart research center in Masaka, Kigali signed between Amb. Ahmed Samy Mohamed El-Ansary and the Minister of Health, Dr. Daniel Ngamije.

The project is backed by the Egyptian Agency of Partnership for Development (EAPD).

Both countries have been enjoying cooperation for the past 45 years in the areas of agriculture, energy, health and education.

The cooperation has opened doors for Egyptians investment to Rwanda where the country organizes annual exhibition for products manufactured from its factories based in Rwanda known as “Egyptian Expo”.
Egypt is among Rwanda’s export markets for agricultural produce including tea, vegetables and fruits among others.