Kagame says time is of essence to realise SDGs 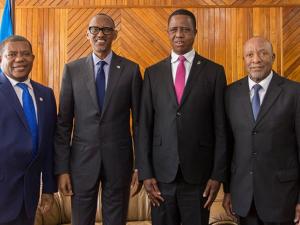 President Paul Kagame and Edgar Lungu,his Zambian counterpart (middle) during the inauguration of the SDG Centre for the southern Africa sub-region in Lusaka yesterday. They are flanked by Dr. Belay Begashaw, the Director General of SDGC/A and Nangolo Mbu

Next month, at the United Nations General Assembly, leaders will participate in the SDG Summit, a high-level political forum to assess progress made, and renew the global determination to achieve the goals.

President Paul Kagame has said that time was of essence for countries to realise the Sustainable Development Goals (SDGs), a collection of 17 global goals set by the United Nations General Assembly in 2015 for the year 2030.

Kagame was presiding over the launch of the SDG Centre’s Sub-Regional Centre for Southern Africa in Lusaka, Zambia, in his capacity as the Chair of the Board of the SDGs Centre for Africa.

“Time is of the essence. 2030 is only a decade away, and our continent is not on track to meet the targets,” he said.

The Head of State highlighted that the Agenda 2030 was meaningful to Africa, saying that it was up to governments, private sector and civil society to make the most of it.

“The ambitious goals represent real, tangible progress in the well-being of our people, namely; improvements to health, economic opportunity, gender parity, and environmental protection, to name just a few,” he noted.

Kagame said those are things that are visible to anyone and that people can feel in their own lives, insisting that the new Centre and the sub-centres will be championing that.

The main centre is located in Kigali.

“The SDGs, just like the African Union’s Agenda 2063, are detailed blueprints for delivering the people of Africa the future they deserve,” but the President said it required good policy-making and reliable national data systems to track progress.

And that is the role the SDG Centre for Africa and other sub-regional centres were playing, particularly to support governments by providing technical advice on upgrading statistical capacity, according to the Head of State.

The Sub-regional Centre launched alongside Zambia’s President Edgar Lungu is a result of the pledge made by the latter and is expected to provide advice and expertise to national governments, private sector, civil society and academic institutions in order to accelerate the implementation of the SDG agenda.

Next month, at the United Nations General Assembly, Kagame said, leaders will participate in the SDG Summit, a high-level political forum to assess progress made, and renew the global determination to achieve the goals.

“The launch of this Sub-Regional Centre is therefore very timely, and I hope other regions of our continent will follow suit,” he noted.

Already, countries like Liberia have committed to host the West Africa centre.