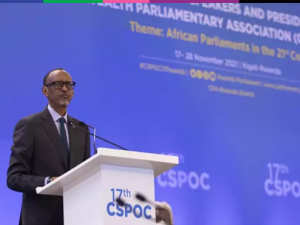 President Paul Kagame has urged parliamentarians to remain at the forefront of building the continent’s resilience against threats like health, among others.

The Head of State made the call while officially opening the 17th Conference of Speakers and Presiding Officers of the Commonwealth (CSPOC) - Africa Region underway in Kigali.

The meeting, which convened over 12 branches of the Commonwealth Parliamentary Association (CPA), was held under the theme “African Parliaments in the 21st Century”.

“Since the beginning of the Covid-19 pandemic many African countries took the lead on response and with support of parliaments,” President Kagame said.

The Head of State went on to commend parliamentarians for playing their part in areas like raising resources, awareness, providing support for pandemic response among other essential functions.

“However as we continue on the path to recovery, parliaments still need to be at the forefront of building Africa’s resilience against mainly health but also other threats,” Kagame pointed out.

Four ideas on how to make progress

Kagame issued a rallying call to all national parliaments to ratify the Africa Medicine’s Agency treaty, which has now entered into force.

“This is a landmark agreement that will help ensure that vaccines and medications in Africa are both high quality and locally produced,” he said.

The President also said that legislators should be a driving force for the implementation of the African Continental Free Trade Area (AfCFTA) and Paris Climate Accord, stating that both require extensive enabling legislation.

Also to prioritise, he added is the move to enact legal frameworks required to speed up digital transformation.

Lastly, Kagame advised that budget allocations should be made towards the attainment of sustainable development goals and agenda 2063.

“This is particularly the case in the health sector where there is too much dependency on external financing.”

He observed that while Africa is not alone in majority of the setbacks, the pandemic exposed its vulnerabilities and reversed some of the gains made.

“We have to work together to get back on track with a sense of urgency. It is by collaborating that our individual efforts will be multiplied,” he pointed out.

Speaking on behalf of the parliamentarians, Rt. Hon Justin Muturi, the Chairperson of CPA Africa region told his fellow parliamentarians that they have what it takes to recover from the current grim picture induced by the pandemic.

Muturi who doubles as the speaker of Kenya’s National Assembly, applaud government of Rwanda’s leadership, saying that it had realized trends in political economic and socio-development for the people in Rwanda and the region.

“We associate ourselves with your deep commitment to promoting women empowerment and environmental awareness which has made Rwanda one of the outstanding countries on our continent,” Muturi asserted.

According to the speaker, Covid-19 has exposed the vulnerability of African governments in terms of the ability to adequately and effectively deal with shocks to the economic and socio-structures.

For instance, he said that limitations in health financing are far below the 15 per cent of annual budgets agreed upon.

“However as speakers and presiding officers, it is our role to pass relevant legislation to formulate policies whose implementation will accelerate Africa’s socio-political and economic challenges.”

The meeting comes at a time Rwanda gears up to host the Commonwealth Heads of Government meeting, in June next year, after 12 years since it joined the organization.