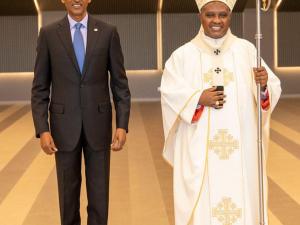 “Today, all of us Rwandans have great joy because the Catholic Church of Rwanda has a Cardinal.

“As we have shared in the honour and happiness, we also need to assist him in the responsibilities so that he can finish his ministry well,” President Paul Kagame said on Sunday during a thanksgiving mass in honour of the cardinal.

Kambanda, who is currently the archbishop of Kigali Diocese, was elevated to the rank of cardinal by Pope Francis on October 25, 2020 and was formally assigned to the rank on November 28, 2020 in Rome. On December 6, a thanksgiving mass was held in Kigali in his honour.

His appointment has raised optimism that the Catholic Church is committed to improving its image in the country.