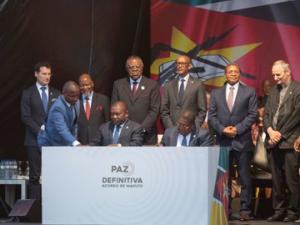 Rwanda’s President Paul Kagame witnessed the signing ceremony of the final Peace and Reconciliation agreement between the Government of Mozambique and Mozambican National Resistance (Renamo) – the main opposition party.

Kagame’s presence at the signing of the agreement, which sealed a peace deal between government and the opposition party, was confirmed by the office of the President in Rwanda

Presidency | Rwanda
@UrugwiroVillage
This afternoon, President Kagame arrives in Maputo, Mozambique for the Signing Ceremony of the country's Peace and Reconciliation Agreement

Presidency | Rwanda
@UrugwiroVillage
President Kagame begins remarks: I am honoured to witness the signing of this historic agreement. On behalf of the Government & people of Rwanda,I congratulate President Nyusi&the Mozambican Government,as well as the leadership of RENAMO for successfully concluding the peace talk

This is the third agreement between a Mozambican Frelimo government and Renamo, preceded as it is by the 1992 Rome General Peace Agreement and the 2014 military hostilities cessation agreement following a new wave of confrontation between the two parties.

The agreement signed pledges peaceful national elections to be held on October this year. Previous elections have been marred by violence and RENAMO allegations that the ruling party FRELIMO rigged results.

In July last year, Mozambique President Filipe Nyusi paid a two-day State Visit to Rwanda, where, together with his host President Paul Kagame witnessed the signing of five agreements that will help business flow and exchange of knowledge between both countries.