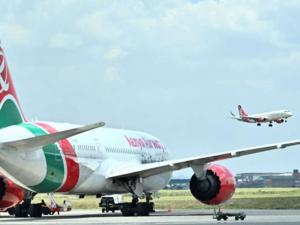 Kenya Airways (KQ) will resume flights to Tanzania on Monday bringing to an end a dispute that has lasted nearly two months over the management of the Covid-19 pandemic.

The national carrier announced it would make its first flight to Tanzania’s commercial city of Dar es Salaam next week since it was suspended from flying to the neighbouring country.

"Our first flight to Dar es Salaam will be on Monday, September 21, where we shall have only a morning flight and the second flight will be on 23rd, and we shall be having two flights henceforth. Zanzibar flights will resume on September 26 on three flights weekly on Monday, Wednesday and Saturday,” said KQ in a statement on Wednesday.

Since the return of international flights on August 1, Kenya Airways, alongside three other Kenyan airlines – AirKenya Express, Fly540, and Safarilink Aviation – had been locked out of Tanzanian airspace after Nairobi retained Dar es Salaam on the red list of nations with a high risk of coronavirus denying its citizens unrestricted entry into Kenya.

KQ has since resumed flights to 30 destinations after grounding of fleets in March by the government to stem the spread of the virus.

The reopening of the Tanzanian airspace for Kenyan carriers comes just hours after the Kenya Civil Aviation Authority (KCAA) lifted the 14-day mandatory quarantine requirement for all passengers arriving from Tanzania.

On Tuesday, KCAA released a revised list that included Tanzania, among 17 other States and territories, whose citizens are now exempt from the two-week quarantine.

Tanzania was the only East African country that had been exempted from the list, which led Tanzania Civil Aviation Authority (TCAA) to retaliate by closing its airspace for Kenyan carriers subject to review by Nairobi.

Kenya has now also eased the entry of nationals from Egypt, Ghana, Nigeria, Cameroon, The Gambia, and Sierra Leone.

TCAA Director-General Hamza Johari announced on Wednesday the lifting of the suspension for all Kenyan operators with immediate effect, noting that the decision was based on Kenya’s action.

“In view of that and on a reciprocal basis, Tanzania has now lifted the suspension for all Kenyan Operators namely, Kenya Airways, Fly 540 Limited, Safarilink Aviation, and AirKenya Express Limited,” Mr Johari said.

Before the ban, AirKenya Express, Fly540, and Safarilink Aviation operated daily flights to and from Kilimanjaro, Dar es Salaam and  Zanzibar.