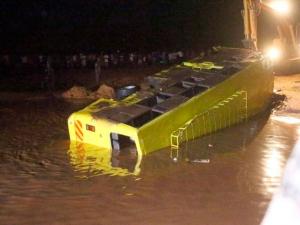 Dozen of members of Mwingi Catholic Church choir died after the bus they were travelling in plunged into Enziu River in Kenya's Kitui County, on Saturday.

Divers recovered seven more bodies Sunday from the bus that was swept off a bridge by the flooding river, bringing the death toll from the tragedy to more than 30.

The bus was taking the church choir and other revellers to a wedding in Kitui on Saturday when it keeled over and sank beneath fast-flowing waters as the driver tried to navigate a submerged bridge.

Twelve passengers managed to scramble to safety but most aboard the stricken bus were unable to escape before it was swallowed by the muddy tide.

Kitui Governor Charity Ngilu said 31 bodies had been retrieved since Saturday by military divers, but warned the toll could rise further as the search and rescue operation continued.

"Today we have been able to retrieve seven. We still have more bodies in the bus," she told reporters late Sunday.

"It is very, very sad indeed. We have lost so many lives."

It remains unclear how many passengers were aboard the bus when it tipped into the Enziu River, about 200 kilometres east of the capital Nairobi.

Among the passengers in the ill-fated bus were members of the bridal party, including a woman, her three children and two grandchildren.

The choir members were to perform at the wedding to solemnise the marriage union of the parents of one of the members.

Witnesses said the driver had stopped to negotiate the river and was close to the other side when the bus was swept beneath the churning currents.

President Uhuru Kenyatta on Sunday sent his condolences to the families of the victims and urged Kenyans to be cautious on roads during the rainy season.

"Once again, the President wishes to remind Kenyans across the country to heed government advisory against attempting to cross swollen rivers, especially during the current rainy season," read a statement from Kenyatta's office.