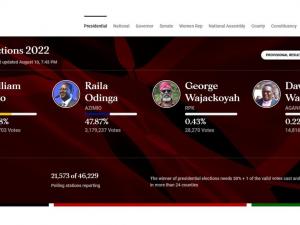 Wondering why different media houses have different tallies for the presidential election results?
Here, the Daily Nation breaks down why that might be.

Following the unprecedented move by the Independent Electoral and Boundaries Commission (IEBC) to allow media houses, political parties, civil society groups and the general public to do their own tallies of the August 9 General Election result, different actors have mobilised resources to undertake the massive tallying at the heart of Kenya’s democracy.

Media houses have set up their own tallying centres to count the presidential election results.
Although all are sourcing the data from the electoral commission, the figures are varying across the media houses depending on a number of factors.

Raila shines in Ruto's backyard
These include the speed of processing the data and manpower deployed.
There is also the randomness with which the IEBC uploads the polling stations results, and how media houses then choose to download and tally it.

Given the randomness of the uploading, and therefore the downloading, the tallies by the media houses — even excluding the manpower deployed and the speed with which they key in the data for processing — there will be different tallies at any one time.

There is, however, assurance that all the results are valid and final as declared at the polling station.
In the end, they are tallying from the same pool, just from different sides of it — and will meet at the centre ... in the end.
“Remember results announced at the polling stations are final and are the ones in the portal. The public portal results are the ones the commission will rely on when doing the tallying at the national tallying centre,” said IEBC chairman Wafula Chebukati in his Wednesday afternoon media briefing.

Visit the NMG elections results portal
“The media houses, political parties and candidates are free to have their own parallel tally. You can count the results, but of course, do not declare. That one you leave to me,” Mr Chebukati said.

The law gives IEBC seven days from the date of elections to announce and declare the outcome. “As the national returning officer, I am assuring you that we shall do everything to have this process concluded earliest possible,” Mr Chebukati said in the Wednesday press briefing.
https://www.thecitizen.co.tz/tanzania/news/kenya-decides-why-media-are-d...